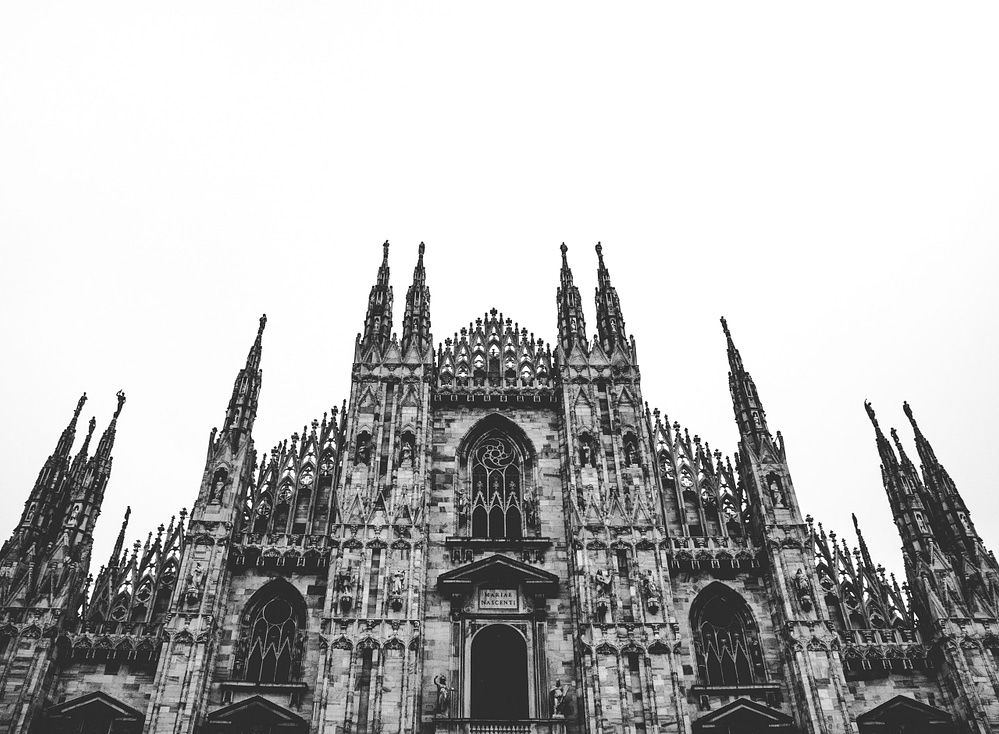 This year, as a part of IA’s many Halloween celebrations, we’re drawing attention to some of our favorite creepy places. Whether intentionally designed to frighten the average passerby or not, these buildings all fall into the category of destinations we’d love to visit but wouldn't want to be stuck in overnight.

None of these made the list solely due to tales of hauntings or terrible events in their history. They all, however, contain architectural elements that make them inherently spooky when compared to the buildings around them.

The Cathedral of Milan 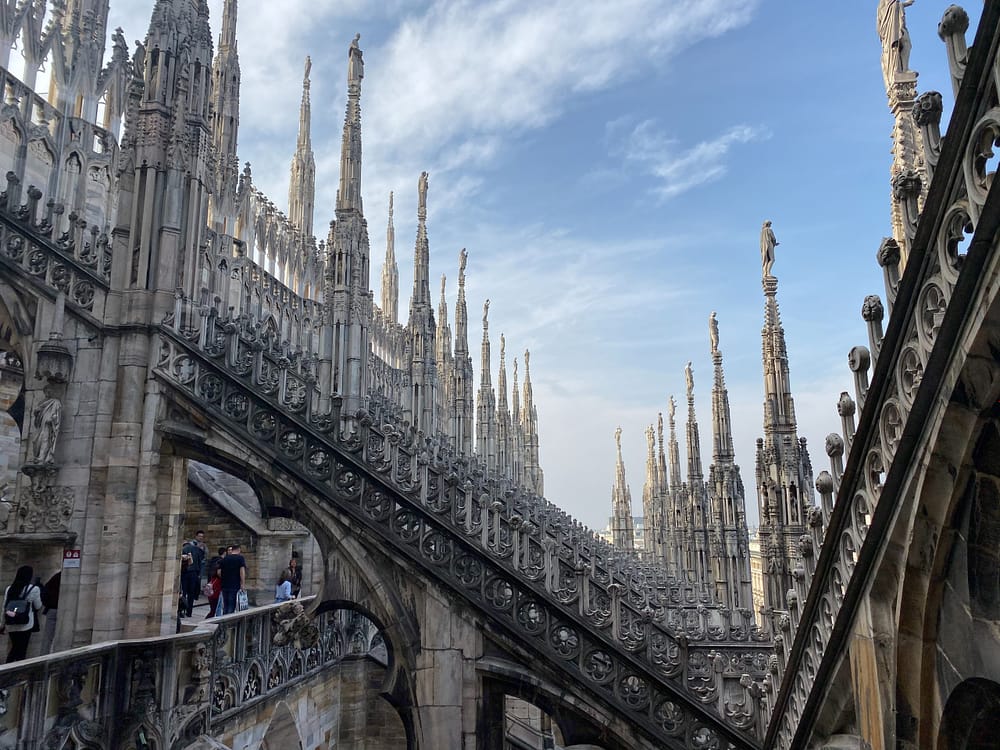 It’s best to clarify that the Milan Cathedral, or Duomo di Milano, is an incredibly beautiful and important gothic cathedral. Home to a Santo Chiodo, one of Europe’s oldest elevators, countless works of priceless art, and a fascinating history, there are aspects of this historic site that make it one of the last places in the world you’d want your flashlight to suddenly stop working.

The Duomo di Milano is designed in the gothic style, so it naturally features bony spires, ribbed arches, an oculus, and other oddly skeletal design features, but it also features a number of uniquely grotesque gargoyles. 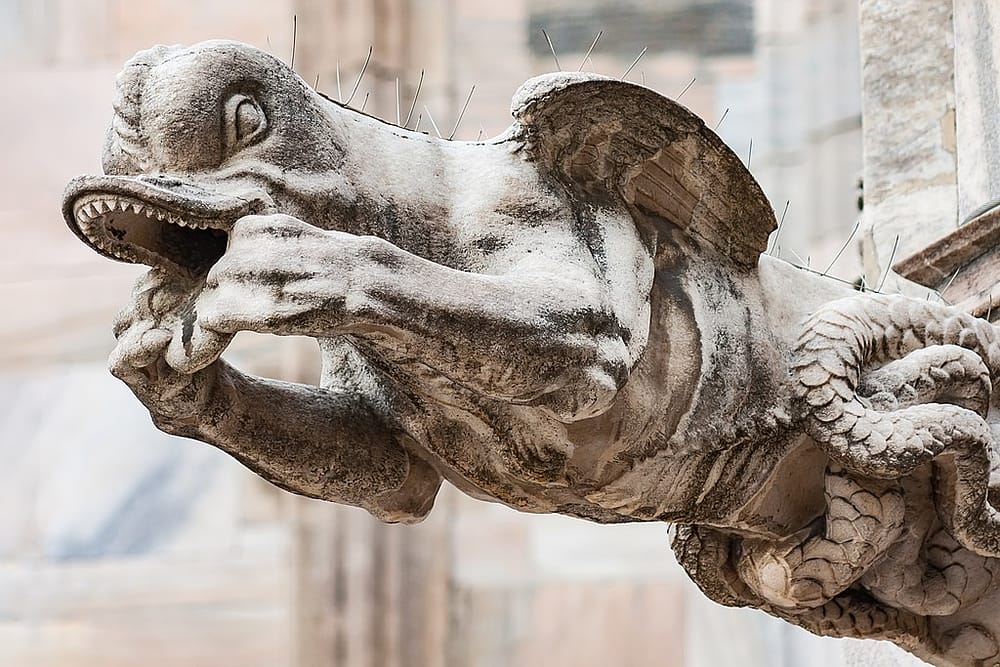 One of many strange gargoyles that can be seen on the Duomo di Milan. Photo by CEphoto, Uwe Aranas, CC-BY-SA-3.0.

While the facade isn’t particularly alarming, some of the more graphic bas reliefs of biblical scenes (Samson holding Goliath’s head, Samson killing a lion, etc.) do set the tone fairly early on.

Samson cutting off the head of Goliath on a bas relief found at the Cathedral of Milan. Image © Guilhem Vellut, CC-BY-SA-2.0.

Once inside, visitors are confronted with an unimaginable quantity of renaissance art works, including paintings, bas reliefs, marble sculptures, and all the grandeur one would expect in such a place, although one sculpture in particular, entitled “St. Bartholomew Flayed” contributes to this cathedral earning a place on our list.

While visiting this colossal structure (during the daytime) would be an incredible opportunity, the sheer number of sharp pinnacles, in contrast to the surrounding buildings, give this excellent example of gothic architecture an extraordinarily spooky appearance.

We’d be remiss in naming the Milan Cathedral as one of our favorite creepy buildings if we didn’t also acknowledge a significantly scarier type of structure, an example of which is only 600 meters from the aforementioned duomo.

The Santuario di San Bernardino alle Ossa, in contrast to the Milan Cathedral, has a relatively charming exterior that largely belies the building’s purpose (or at least that of one of its rooms)—which is to hold bones. Around a century after the completion of the original cemetery and hospital, the cemetery became full, and so the ossuary came into use. It wasn’t until a few years after the Great Plague of Milan, though, that the ossuary was redesigned by Giovanni Andrea Biffi and the bones were used as decorative elements in the Rococo style.

Using human remains as decor isn’t as unique as one might expect. A number of different cultures have practiced some form of storing or displaying bodies in the built environment, including the ancient Persians, Mesoamericans, Songhai people, Chinese, Romans, and many more. In fact, catacombs of one variety or another have existed on six of the seven continents.

We’ll spare you the grizzly details, but if you’re looking for other examples of ossuaries, catacombs, or tzompantli, we recommend looking into a few of these macabre  structures:

The Sowden House in Hollywood. Image via the Library of Congress.

Use of the Mesoamerican Revival Style was not totally uncommon in early 20th century American architecture, and while we have a deep respect for many examples of this short-lived architectural movement, these private residences designed by Frank Lloyd Wright and his son, Lloyd, have earned a much-deserved space on our list of creepy buildings.

The facade of the Ennis House in Los Angeles. Image © evdropkick, CC BY-SA 2.0

The Ennis, Storer, and Sowden houses were all built within six miles of each other over a three year span (1923-1926). All three of the structures have a striking entrance, such as that of the Sowden House, which the National Park Service’s Historic American Buildings Survey described as “cavelike” in 1940.

The textile blocks and the tiered design seen in three of the examples of Mayan Revival architecture that the Wright family created in Los Angeles are intended to evoke visions of ancient Mayan temples, yet somehow the follow-through is very disquieting.

Predjama Castle has a long and storied past that places it among some of the most fascinating castles in Europe, and (we’re guessing) a number of pretty serious bat infestations. Nestled into the side of a cliff at the mouth of a cave, the castle is only a handful of kilometers away from Slovenia’s second longest cave system, and there is, to-date, no conclusive proof that vampires ever inhabited the long-secret tunnels that lead from the castle into the nearby hillside.

These caves were particularly useful to one Erasmus of Lueg, burgrave of Predjama Castle in the 15th century, when he not only utilized them to sneak food past a Habsburg army during a year-long siege, but allegedly to also sneak in loot he had acquired during the peak of his robber baron career.

Erasmus had ordered the supply tunnel expanded during his time at the castle, and visitors to the castle can still tour the caves via a precarious set of stairs. The interior rooms of the castle regularly incorporate the rocky terrain, with a number of stairs and rooms utilizing the raw rock as a wall.

The antler-bedecked halls of Predjama Castle (left) and the tunnels leading out of the castle, and into the Slovenian hillside (right). Images © Shadowgate, CC-BY 2.0.

Suffice to say, while Predjama Castle (and a number of nearby sites) make for some incredible tourist destinations, we can’t recommend making the visit without the requisite supplies - namely silver bullets, garlic cloves, holy water, and a wooden stake.

Orcus the God of the Underworld in the park at Bomarzo. Image © Roberto Fogliardi, CC-BY-SA 3.0

Either lovingly or literally referred to as the Park of Monsters (Il Parco dei Mostri di Bomarzo), this garden and the handful of structures within have a surprisingly beautiful origin story: they were developed to help the patron, Vicino Orsini, cope with the death of his beloved wife Giulia Farnese.

For a space that resembles a Hieronymous Bosch painting, the gardens of Bomarzo owe a debt of gratitude to a very different artist—Salvador Dalí. Dalí created a short film in the gardens and was so inspired by the otherworldly figures that he used them for inspiration in his painting The Temptation of Saint Anthony. The Sacro Bosco, which had long sat forgotten and in disrepair, thus became a tourist attraction and still sees thousands of visitors each year.

But there’s a very good reason that the gardens don’t offer night tours. The majority of the statues within the park represent various monsters from different corners of mythology, including dragons, a hellhound, a vicious giant, and Orcus (the god of the underworld), not to mention an array of bears, elephants, lions, and some truly terrifying whales.

The Manila Film Centre played host to the First Manila International Film Festival, and unfortunately, was the setting of a horriffic construction accident that took the lives of 168 workers before construction was completed. Resembling a Jean "Moebius" Giraud creaton, the building was completed in 1982. But the $25 million undertaking would later be damaged by an earthquake and a fire and fall into various degrees of disrepair.

Widely considered to be haunted, this utter behemoth has sat unused since a 2013 fire, and, suffice to say, is no longer the home of the Philippines Film Archive, or any recent film festivals.

One of the only structures on this list intentionally designed to instill nightmares, the Anata No Warehouse was a cutting-edge arcade that unfortunately closed its doors in 2019.

The interior of Anata No Warehouse in Kawasaki, Japan was intentionally designed to look and feel like the walled city of Kowloon. Image © Ken OHYAMA, CC-BY-SA-2.0.

Taking inspiration from the Kowloon Walled City, the designers of the building (Hoshino-Gumi) allegedly went so far as to import props and even trash from Hong Kong to create a resemblance to a setting featured in a number of films, video games, and manga due to its incredibly dense, unsanitary conditions.

Both retro and modern video games were played in the amusement park’s five stories, but we can only imagine how chilling the numerous sci-fi-themed rooms were to players until the site closed due to disagreements with the building’s landlords.

If beauty is in the eye of the beholder, we’re assuming that the same rule applies to frightfulness. But because of the design elements they utilize or the relationship they have with nearby structures or the defining art they house, these properties struck us as the perfect spaces to highlight what we hope will be a particularly spooky Halloween.

Are there any ghoulish designs that we forgot to mention? Be sure to find us on twitter at @iaarchitects and let us know before Halloween so that we can highlight your suggestion.