Embracing Mindfulness in Our Digital World 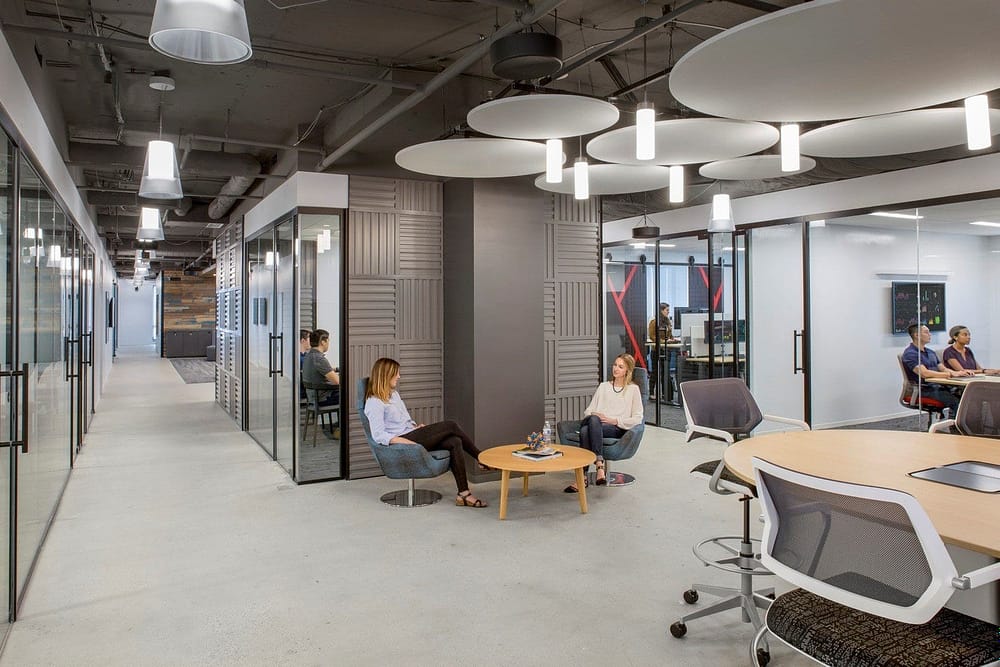 Without knowing much about it, I attended Wisdom 2.0. I had seen ads, recognized the names of some of the featured speakers (Jack Kornfield, Jay Shetty, Paul Hawken, Tristan Harris, Chelsea Handler, etc.) and was intrigued. The conference, in San Francisco, started on a Friday night in March and ran through Sunday; by that time, I was sold. There was a resonance. With take-a-ways from the conference, I would sharpen my viewpoint and performance, both professional and personal, and share what I had learned. As a Senior Director of Strategy at IA, I focus on creating work environments in a digital world for optimum human experiences, wellbeing, top performance, and sustainability. What I heard had a direct bearing on what I do and my goal of continuing to improve how I approach my work.

According to its founder Soren Gordhamer, “Wisdom 2.0 is a conference tackling one of the biggest challenges of today’s age. Connect through technology, but do so in a way that supports a person’s well-being, work effectiveness, and is ultimately useful in the world.” This year’s event (its tenth) hosted over 2,500 participants from 24 countries, all intent on living well with all that technology does (including the bombardment of too much information), pursuing meaning, tuning-in to calm, and making human connections.

To share a few highlights, Jay Shetty’s thoughts in conversation with Gordhamer set the tone of the conference. In a span of seven years Shetty, named to Forbes 30 Under 30 Class of 2017, went from living as a monk to become a digital strategist, film maker, and influencer. While hosting The Huffington Post‘s digital morning show, he reached a daily audience of over one million and was number one on Facebook Live. Intent on taking concepts of wisdom and peace viral, and equipped with insights on productivity learned as a monk, Shetty became Accenture’s Social Media coach for executives and an advisor to corporations, including Google, Coca Cola, EY, Microsoft, and Facebook.

He asserts that love, duty, and hate are social media motivators that amplify what’s inside us—including envy, competition, and gossip. And social media needs to be fed, its appetite encouraging overstatement, sensationalism, and hype. Yet people follow social media so that they won’t feel alone and think they’ve found meaning there. In response, Shetty advocates an engagement with social media to share good, follow good, and create good.

Known as the closest thing Silicon Valley has to a conscience, according to a now well-known article in The Atlantic, Tristen Harris also spoke. Harris spent three years as Google’s design ethicist, developing a framework to address how technology should ethically steer the thoughts and actions of billions of people from digital screens. Interested in magic and software since childhood, Harris joined experimental psychologist B. J. Fogg’s Persuasive Technology Lab while at Stanford, and he understands how to control audience attention and effect choice. A simple example: Menus propose options—you think you’re in control and have a choice—but actually they manipulate that choice through limited, curated arrays of offerings that continue to diminish in response to your patterns or pauses and clicks.

Noting the industry’s “race to the bottom of the brain stem,” and that the use of Pavlovian techniques on the web plays to our most basic vulnerabilities, he left Google and started a non-profit, Time Well Spent, to counter what he calls the digital attention crisis. Surprisingly, companies like Apple, Google, and Facebook are listening. Mark Zuckerberg has made time well spent a goal for his company and both Apple and Google have developed Digital Wellbeing initiatives with features on their phones. As a thought leader, Harris briefs heads of state, technology company CEOs, and members of the U.S. Congress about the attention economy with the goal of steering the race back up the brain stem to wellbeing.

Climate Change is a Gift

A leading voice in the environmental movement and an advocate for corporate reform of ecological practices, industrial ecology, and environmental policy, Paul Hawken was another speaker. Paul is the founder of Project Drawdown (100 solutions to reverse global warming), a non-profit dedicated to researching when and how global warming can be reversed, and a consultant to CEO’s and heads of state.

Hawken said, “Climate change is a gift.” Wait, what?! He sees it as feedback, a performance indicator. And he warns against using terminology normally associated with war to reference climate change. Phrases like fight the war, in his opinion, suggest that we are victims. He thinks that how we communicate is obscuring brilliant solutions to climate change. When asked about the Green New Deal, he said he liked their “spunk and gumption,” but that he promotes a more comprehensive dialogue that doesn’t demonize anyone’s point of view—because if we’re right it implies that others are wrong and if we should be doing something it heaps guilt on those who aren’t doing it. He believes we need to approach solutions without blame and promote collaboration and possibilities—together is the way to find answers. 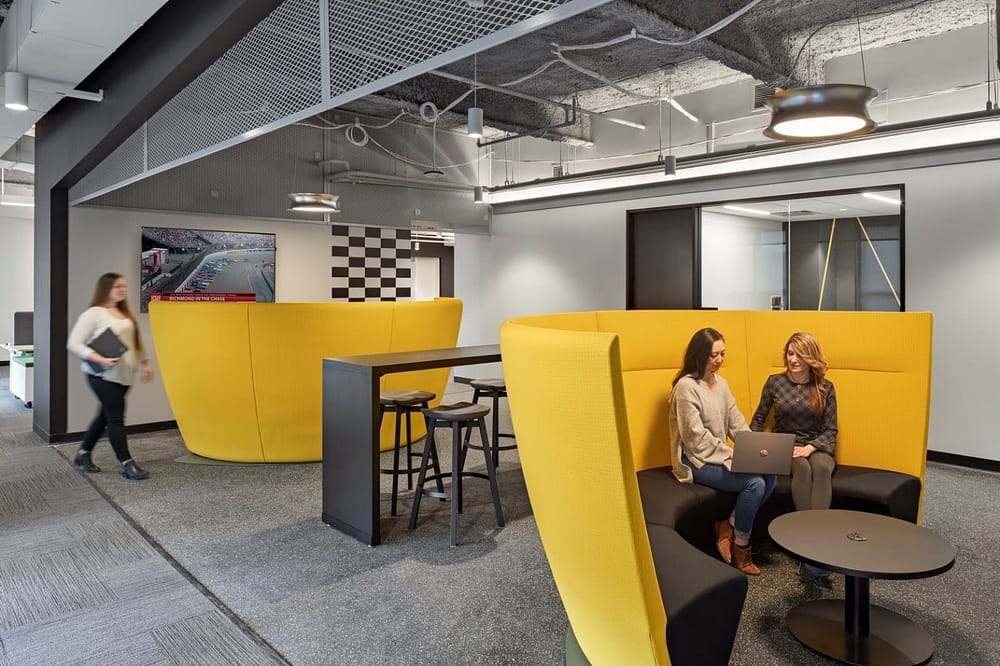 We can reverse global warming. Quoting Matt Damon’s character in the film The Martian (which he considers an allegory), “You have to do the work, do the math, and then you come home.” Hawkins’s message was a call to action to do the work, make a positive impact, and take a mindful approach to a complicated problem.

Other participants included a group of chief mindfulness officers—moderator Rich Fernandez, formerly at Google, now CEO of Search inside Yourself Leadership; Peter Bostelmann, founder and director of the Global Mindfulness Practice at SAP; Director of Mindfulness for Aetna Cheryl Jones; and Program Innovation Leader Mindfulness, Trauma, and Racial Equity for the City of San Francisco Jenee Johnson. Each talked about the agendas they had developed that teach mindfulness to their employees. Bostelmann said that so far 8,000 global employees at SAP have run through their program with another 8,000 waiting to engage. All of the CMOs reported that the health of their workforces have seen a positive uptick in performance and productivity along with a heightened awareness of well-being, empathy, and compassion. Impressive! 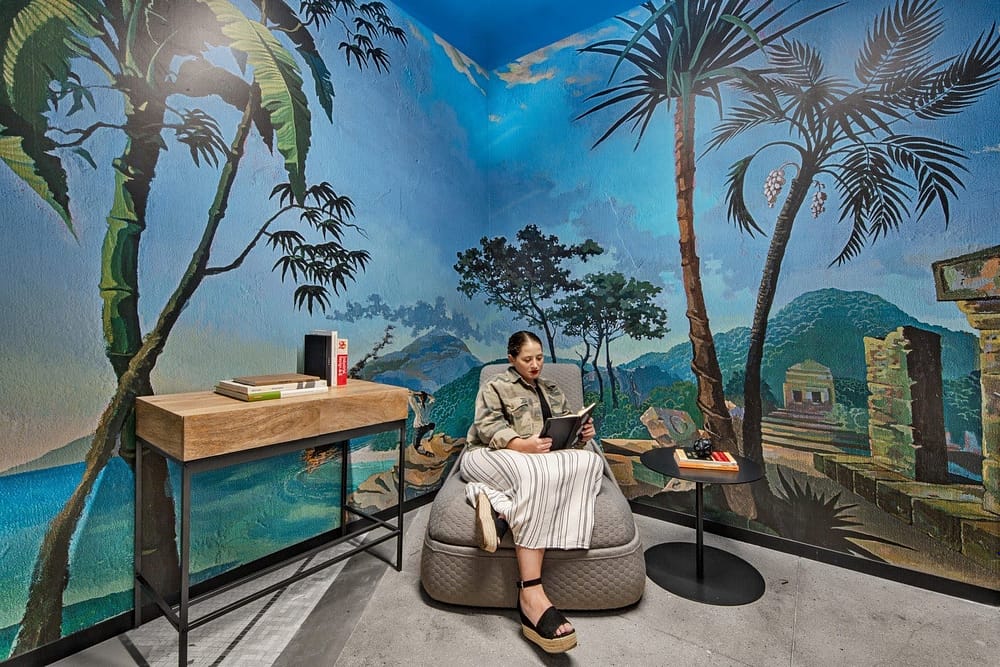 Principal and Senior Director of Ecos Studio, Mary Lee Duff develops high performance work environments and workplace strategies that integrate real estate, technology, process, and people to support and enhance organizational goals and objectives. With over 25 years of experience, she believes deeply in the value of end-user engagement from high-level visioning sessions to focus groups and ideation exercises that bring new concepts and planning to the forefront. Representative clients include SAP, Mercedes Benz, Salesforce, Google, and LinkedIn.

Workplace design thinking is evolving at the fastest pace in decades, and one word seems to be on everyone’s lips: hospitality. At the same time, a wholesale pivot to a pure hospitality design approach (an all-out sprint for the luxurious and engrossing aesthetic of the boutique hotel or hot new restaurant) is an overreaction. Admittedly, END_OF_DOCUMENT_TOKEN_TO_BE_REPLACED

A New Perspective on Trading Floors