LinkedIn offices in the Empire State Building include a hidden speakeasy 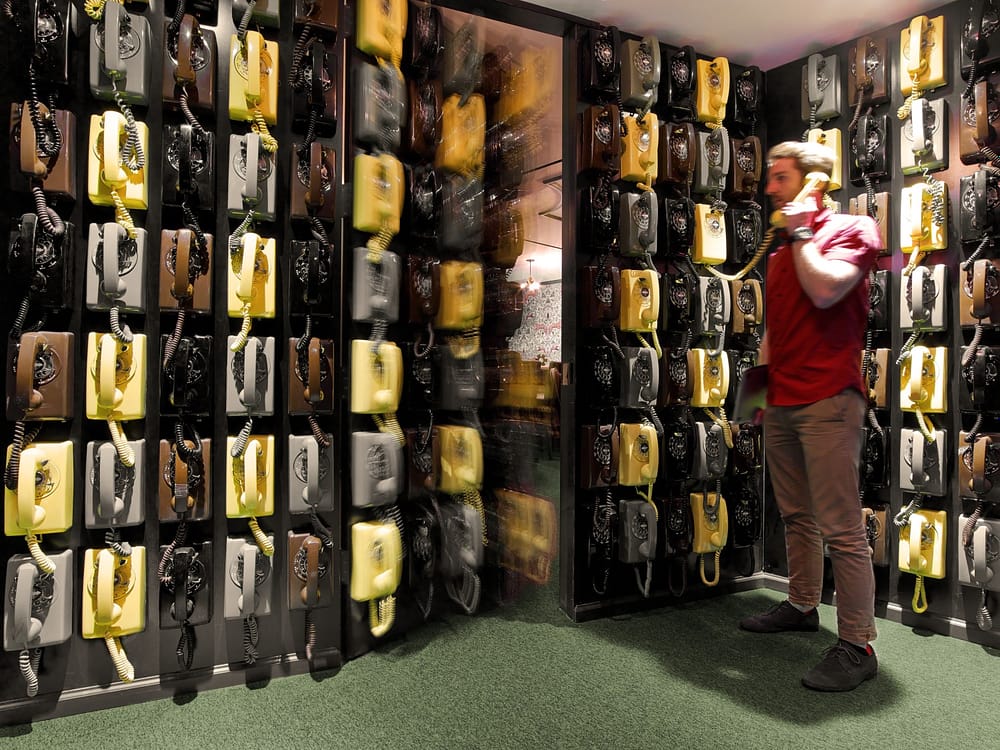 Social network LinkedIn’s offices in New York’s Empire State Building include a room lined with vintage telephones that leads to a secret bar (+ slideshow). International firm Interior Architects (IA) was tasked with creating a “fun and vibrant” workspace for LinkedIn’s sales team on the 28th floor of the iconic Manhattan skyscraper – the highest of the levels the company occupies in the building.

“LinkedIn requested a range of informal lounge and collaborative spaces, a cafe, a fitness room, and better circulation paths to separate work areas,” said IA designer Lauren Helman Foley. “They also wanted opportunities to personalise the space, as well as creating a ‘destination floor’ through the addition of amenity spaces.”

The entire floor is treated as a “club level” and recreation space for employees, with amenities such as billiard tables and a screening room, as well as a speakeasy. The hidden room is accessed via a vestibule that is covered with 133 rotary telephones. One of the phones unlocks a concealed door when the receiver is lifted off and replaced, allowing visitors to enter the bar area decorated with patterned wallpaper and an eclectic mix of furniture. “If you’re not sure which phone it is, you can call it with a number passed through the office by word of mouth,” Helman Foley said. Bright blue was used to cover all of the surfaces in the central lift lobby, from which a feature wall in the same colour forms a ribbon around the communal areas. In different areas, this element incorporates a built-in seating unit, a gallery and a storage area for billiard equipment, until it terminates as the ceiling for the screening room. The rest of the spaces largely follow a black, white and grey colour palette, although an informal meeting area is surrounded by bright red curtains that match a carpet, the furniture and a lampshade. Formal meeting rooms are more sombre, fronted by glazed walls and decorated with floor-to-ceiling photographs of New York alleyways. “The conference rooms were named after ‘hidden’ New York streets or tertiary streets that aren’t very well known,” said Helman Foley. “For example, there is a small conference room named after Tennis Court St, one of the smallest blocks in Brooklyn. “Workspaces on the 28th floor are populated with clusters of height-adjustable desks in the western and northern portions. To the south, views out of the windows take in the nearby Flatiron Building and Lower Manhattan beyond. “The LinkedIn sales teams spend a lot of time on their phone headsets so it was important that they not face one another like they would in a typical benching layout and also that they have paths to walk on while they are on the phone,” Helman Foley said. “They pace a lot. Thus, the meandering path became a secondary design concept on the ‘club level’.” Along this route, one wall is decorated with black and white photographs of employees’ pets, while drawings of empty picture frames run down another white corridor. A linear indigo ceiling fixture is designed to help visitors navigate back to the circulation core.