Productivity is in the Air, Part Two As you may recall from last fall’s “Productivity is in the Air” post, IA’s San Francisco office was digging deeper into the chronically stuffy and stale air characteristic of all its enclosed meeting and huddle rooms. During the month of September, the office partnered with Senseware technologies to pilot their air quality monitoring system, and the IA team was astonished by the results.

Carbon Dioxide and VOC levels were spiking at levels beyond the critical thresholds established by the U.S. EPA. As part of an office-wide refresh, the original HVAC installation was checked against design. The IA team found that mechanical flex ducting from the air return grills (that would pull the air out of the enclosed rooms) had never been installed above the huddle rooms. Return air from the huddle rooms was blowing around above the ceiling plenum (the air space above the ceiling) without being diverted from the meeting environments below. A due diligence investigation, proposal and pricing for alternative solutions, and installation of flex ducting for the return air from those rooms, as well as a rebalancing of the HVAC system zones, became top priorities to provide a better quality air flow in all of the huddle rooms.

Rather than stopping there and assuming that all was resolved, the San Francisco team brought back Senseware’s air quality monitoring system to check the progress. While there are still some small spikes in the 2019 graphs, they are a drop in the bucket compared to the issues seen in 2018, and small spikes are relatively normal as a space is used throughout the day. As shown in the September 2018 versus May 2019 charts for two of our huddle rooms, the air quality has improved astronomically! Air quality, though invisible to the naked eye, is an important layer in interior architecture. High levels of carbon dioxide (CO2) impair occupants’ cognitive function, and the presence of VOCs can be the cause of more sick days and respiratory discomfort. Air quality monitoring systems allow visual learners, like myself, to understand the invisible forces at work in our environment and to appreciate their impact on the entire office ecosystem. 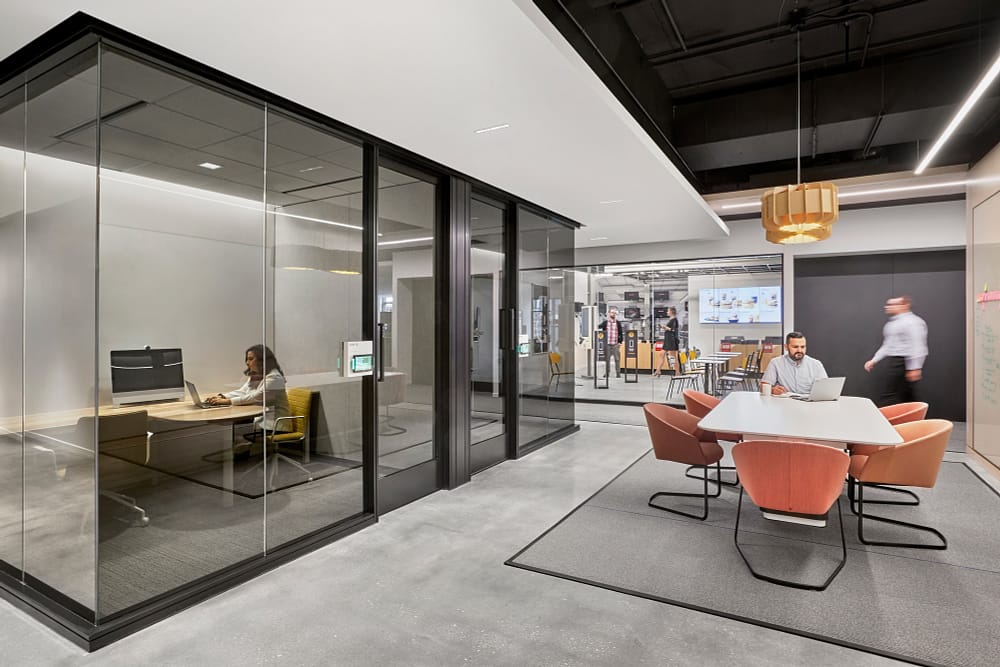 While upgrading building ventilation systems sounds like the most logical solution, indoor air quality oftentimes comes at the expense of energy performance. Terrapin Bright Green’s (TPG) recent report, The Nature of Air, states that in a typical large office building the fan power for ventilation alone is approximately 10% of energy consumption (not including the energy needed for heating and cooling). Thus, by improving our wellbeing we are creating a negative impact on the environment. Traditional filtration and ventilation systems function on a cradle to grave approach – sucking old air out and pumping fresh air in rather than cleaning the air already inside. TPG’s report shares some emerging technologies that are inspired instead by nature’s methods for cleaning air, through agglomeration, sterilization, and oxidation. Photocatalytic Oxidation (PCO) , for instance, is a highly effective air purification technology that compared to HEPA filters (which can filter particles no smaller than 0.3 micron) is able to destroy particles as small as 0.001 micron, including microbes, VOC’s, and chemically active compounds. Bi-polar ionization (BPI) is another option based on ions. Both neutralize harmful pollutants in existing indoor air to close the filtration cycle and reduce energy use.

Interestingly, and beneficial for home use, swapping out standard paraffin (a byproduct of petroleum refining) candles for beeswax candles can make a lasting impact. Beeswax candles burn with almost no smoke and have a sweet scent without added perfumes. They also release negative ions which bind with toxins and clean the air. And while there is still minimal science to back the trend of Himalayan pink salt lamps, some argue that the naturally hygroscopic salt attracts water molecules containing particulate matter and pollutants, drawing them out of the surrounding air.

More cultural awareness of the impact of air quality on our cognitive and physical systems has already brought great improvements to the built environment. It is critical that we recognize and optimize this invisible force, as well as understand the environmental impacts that sometimes come with improvements for wellbeing and improved performance.

Amy Groome is a designer in IA’s San Francisco office. She earned a Bachelor’s of Science degree in Interior Design from Virginia Tech and is particularly passionate about wellness and wellbeing in the workplace. She has worked on projects for clients including Okta, Symantec, and Equinix, and helps lead sustainable wellness efforts in the San Francisco office and firm wide.

Workplace design thinking is evolving at the fastest pace in decades, and one word seems to be on everyone’s lips: hospitality. At the same time, a wholesale pivot to a pure hospitality design approach (an all-out sprint for the luxurious and engrossing aesthetic of the boutique hotel or hot new restaurant) is an overreaction. Admittedly, END_OF_DOCUMENT_TOKEN_TO_BE_REPLACED