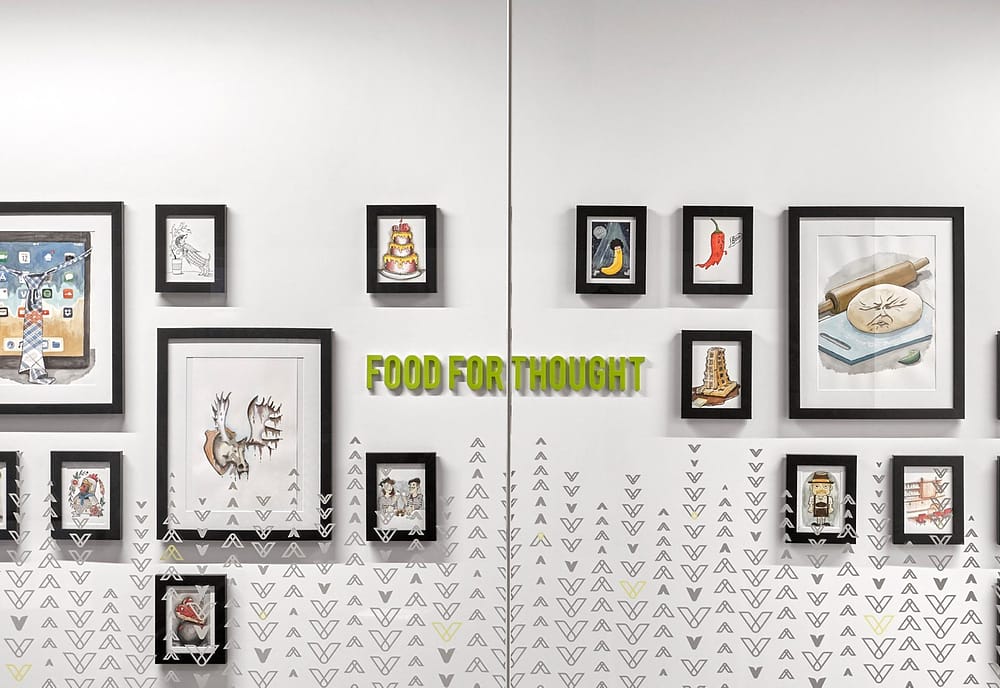 S2G Ventures is passionate about food. As a collection of three venture fund groups all focused on the food industry, their organization impacts the mission of improving food from seed to growth. In other words, the companies in their portfolios all seek to improve how we grow, harvest, prepare, package, distribute, or sell food as a means of making the world a better place. It’s a passion with which many of its investors and all of their employees align.

When it came time to relocate their headquarters from Chicago’s West Loop, S2G Ventures called on IA Interior Architects to ensure that their new space would nott only meet all strategic needs but would also speak to the core of the business model and workplace culture. Reflecting their passion for food would be fundamental to both.

A culmination of the efforts of IA lighting designers, architects, interior designers, and experiential graphic designers, the space would also reflect the concept of an urban oasis, embodying the firm’s past, present, and future. As a part of this project, IA introduced the S2G team to local artist Rob Funderburke, who would be tasked with creating a food-centric mural in the cafe space. When considering themes for the mural, the S2G team suggested several ideas. Chad Finken, IA Experiential Graphic Designer, found one particularly amusing: illustrated food puns—an idea that was universally embraced. Playful illustrations would represent an assorted series of food puns such as a haunted pepper (ghost pepper) or a flower with a yolk (eggplant), etc.

“We loved the energy, and we loved the playfulness of it.” he remembered later. But, charged with leading the graphic strategy of the workspace, Chad felt that the suggested placement wasn’t ideal given how the space was going to be used. “Since S2G focuses on entrepreneurs making an impact through healthy and sustainable food, the playful nature of the food puns didn’t necessarily align with the backdrop of their café,” which was in a centralized, high-traffic, and client-facing location. 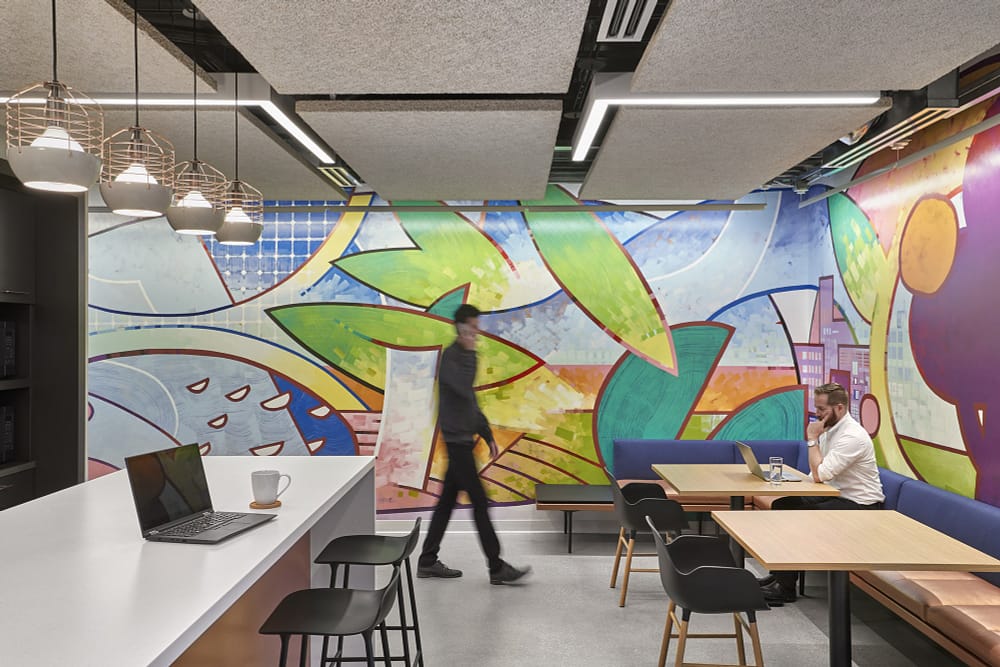 However, Chad remained intrigued with the idea. Although the cafe space wasn’t the ideal space for the puns, the team had identified another area near a game room that would be a prime venue for a gallery of droll food puns. So, from a list of examples provided by S2G he picked a favorite and developed a prototype. the Swedish fish. Somewhere in the process of painting a fish with blue, white, and yellow scales, Chad thought of his IA teammates and how they might approach the project. In fact, if IA was going to develop images for multiple puns, having multiple contributors would create some valuable visual diversity. A number of IA designers, architects, and others had artistic backgrounds. Christine Lai, for example, an integral member of the IA Experiential Graphic Design team has quite a portfolio of woodblock and screen prints. Brandon Olsen, also on the EGD team and a recent RISD graduate, has experience working in several other mediums. Chad likewise knew that teammate Ruben Gonzales, a Senior Job Captain, has a distinguished a portfolio of watercolor paintings.

After reaching out to them and asking for their ideas, Chad presented a prototype to S2G, as well as a description of how other members of the IA team would contribute. It was decided that IA would create 28 original pieces of artwork under Chad’s direction.

“We collaborate all the time on the creation of elevations and designs, but having the opportunity to work together to develop original art was really exciting,” said Christine Lai, an IA Experiential Graphic Designer who was a part of the team. “We decided that we wanted it to look eclectic; instead of asking one artist to do them or all of us using the same medium, we used different styles. I went with acrylic, pencil sketch, watercolor and tattoo flashes—different styles to approach similar subjects.”

Over the next few weeks, the team met intermittently to fine-tune the list of puns and discuss how they were approaching their work. When the finished illustrations were presented to the team at S2G, IA was told they’d hit the nail on the head.

To Finken's surprise, the 28 puns have become an integral part of the tour of the new space for visiting S2G clients and stakeholders. “What we’ve been told is that these have become the piece de resistance of their space,” says Chad Finken, “which is just really great to hear. It has turned into this game where guests are taken to the illustrations and asked to identify the puns. It was a fun project, and we’re incredibly proud of the feedback we’ve gotten so far.”

Use the carousel below to view the full assortment of images IA created for S2G Ventures.

Workplace design thinking is evolving at the fastest pace in decades, and one word seems to be on everyone’s lips: hospitality. At the same time, a wholesale pivot to a pure hospitality design approach (an all-out sprint for the luxurious and engrossing aesthetic of the boutique hotel or hot new restaurant) is an overreaction. Admittedly, END_OF_DOCUMENT_TOKEN_TO_BE_REPLACED

Above and Below: Natural Light

Above and Below: Natural Light
Load More