Neurodiversity in an Inclusive Work Environment 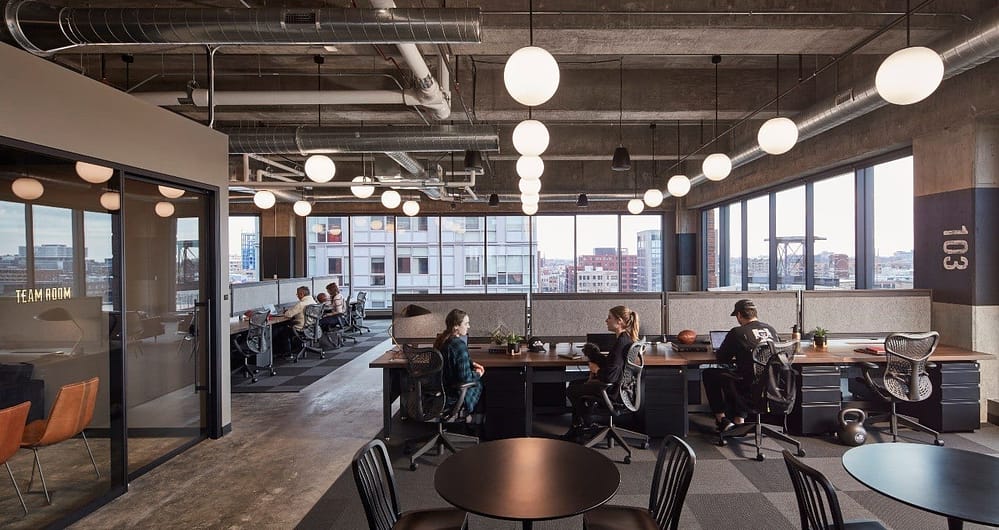 Open-plan offices can be distracting and overwhelming for some staff with neurodivergent conditions. rEvolution, Chicago. Photography © Tom Harris.

A capacity for highly specialized productivity that can sharpen a competitive edge, powers of perception that probe beyond the norm, a strong sense of commitment and loyalty; these are highly sought-after employee attributes in today’s competitive market for intellectual capital. Yet by declining to consider and ultimately provide for potential employees who fall within the general category of neurodiversity, a significant pool of talent remains invisible and untapped—although a few savvy employers are taking the lead and reaping the benefits.

Why pass over those with neurodiversity? Lack of recognition, understanding, or an accepting corporate culture and the absence of appropriate work environments are big contributors. The neurodiverse to varying degrees are wired differently from the neurotypical. Valued attributes in the conventional workplace—emotional intelligence, team player, strong eye contact, adherence to standard practices—are not necessarily those of the neurodiverse or even options they can cultivate. Furthermore, the hiring process, particularly the candidate interview, which is geared to the norm, will quickly disqualify them.

Although historically regarded as diseases, neurological differences (including Dyspraxia, Dyslexia, Attention Deficit Hyperactivity Disorder, Dyscalculia, Autistic Spectrum, Tourette Syndrome and others) affect more than 10% of the population. A few companies like Microsoft, JPMorgan, EY, Google, SAP, DXC Technology, Ford, and Amazon are currently developing or conducting neurodiversity-at-work initiatives to make sure that they offer a welcoming environment for those employees.

Several industries, particularly IT, engineering, and finance, are actively seeking talent from within the autism spectrum to benefit from the special capabilities of a high-functioning neurodiverse staff and take advantage of their unique talents, which may include the ability to recognize patterns in data that many might miss. Other highly skilled workers may have a proclivity for detail and the academic (a plus factor for many an enterprise), which can be a trait of those with social anxiety. While those who suffer from ADHD or dyslexia struggle to maintain and organize their workload and calendar, but are often the dynamic relationship builders needed to develop new business.

It’s not surprising that those with a neurological difference, despite their obvious skills and passion for their work, are often underemployed or have difficulty maintaining a regular job because of their differences (including a variety of behaviours that can encompass impulsive movements such as tapping, humming or fidgeting, a lack of social skills, and strict routines) for which co-workers and the workplace itself are not prepared. The playing field is not equal which leads to feelings of ineptitude and worthlessness for those who are different.

Studies suggest that college graduates with ADHD, for instance, earn $4,300 less per year than peers who don’t have ADHD. And those with ADHD change jobs frequently—often impulsively—and are more likely to be fired, miss work, and have troubled relationships with co-workers. Yet adults with ADHD exhibit above average resilience and adaptability, enhanced creativity and imaginative skill, and multitask with ease. Once they adapt and develop coping skills, they frequently excel in the workplace.

Currently 4 in 10 dyslexics are unemployed yet only 1 in 10 make up the population as a whole. Likewise, social anxiety disorder has a substantial negative impact on employment despite the fact that its suffers are often analytical, highly intelligent, and specialists in their field of interest.

Individuals with Asperger Syndrome, which is on the autism spectrum, are an untapped talent pool for employers. To put it in perspective, 35% of those on the spectrum will go on to attend college but those with Asperger's will likely see a 75-85% unemployment rate, despite the fact that, beyond the social good that comes from their employment, the work they perform can increase productivity and also reduce employee turnover rates because of their long-term sense of commitment.

Too frequently, psychology has represented neurodiverse behaviour as a psychological problem to be overcome, rather than a natural state offering valuable assets. Change is slow, but today's neurodiversity activists reject the idea that Autism, among other forms of neurodiversity, should be cured, and advocate for celebrating autistic forms of self-expression and competence.

The role of the designer is to create environments that help release the potential of a neurodiverse staff’s hard skills in science, technology, and mathematics, and enable them to co-exist, engage, and communicate with colleagues who have softer skills. Although ideally offices are planned overall to make everyone feel at ease, that is not always possible, and adjustments through technology and space planning can help create pocket environments/neighbourhoods tailored for diversity. An integrated technology can offer positive solutions that directly accommodate the needs of differing personality types. A combination of software can address multiple features including lighting, thermal comfort, timekeeping, and deadline setting.  For example, staff with Asperger’s Syndrome do not like their patterns of action interrupted, but by using voice activation to control heating and lighting in their work areas disruption is minimized. 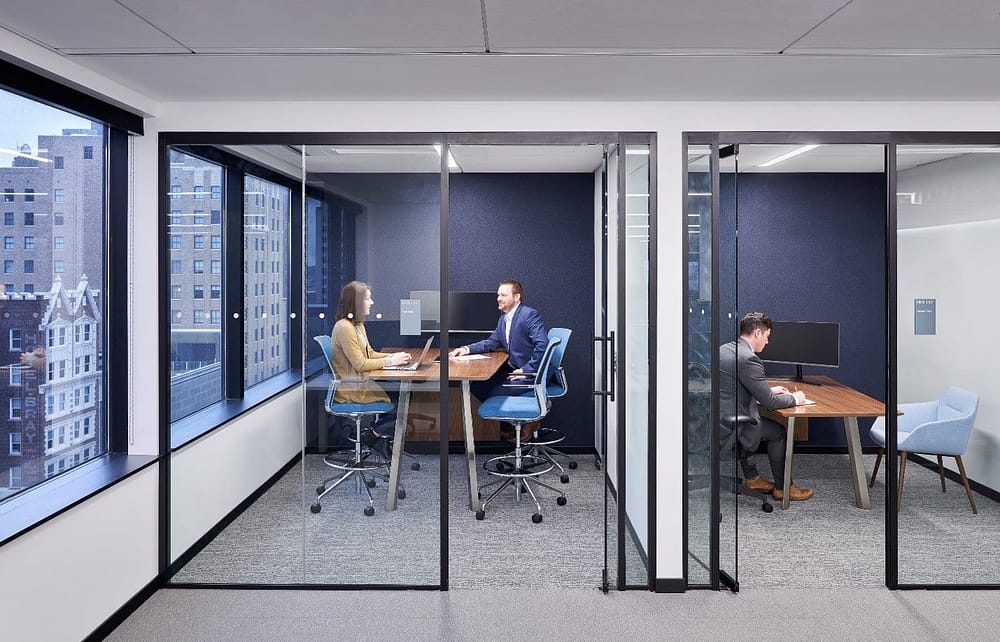 Providing acoustic privacy screens to minimize disruptions and position staff away from major routes or services like restrooms or café areas can be another tactic. Acoustic barriers in furnishings and wall coverings can also contribute to creating a comfortable sound level. These features help staff with specific needs to maintain exclusive control over their environments while not alienating their co-workers.

Other considerations might include the use of more natural light rather than harsh overhead lights. Likewise, disruptions caused by a heightened sensitivity to colour, contrasting tones, and symbols can easily be managed through thoughtful design. These are relatively inexpensive, quick remedies that are worth the effort when compared to the loss of valuable and talented staff members who are unable to work under the same general conditions as their colleagues.

Equally important, those who suffer from ADHD will benefit from free address systems that support a choice of work environments and reflect their need for frequent movement. By using voice recognition systems their files can travel with them to their work site of choice without fear of disorganisation. For people who have difficulty with personal organisation—typical of ADHD or dyslexia—meaningful adjustments can be as simple as providing in-trays, post-it notes, or an additional monitor to make scheduling less intimidating and screen work easier. Alternative ways of experiencing an office are key here, with a free address system supporting a range of open and enclosed spaces that allow for choice to limit the anxiety some feel when interacting with others and support more secluded working styles. 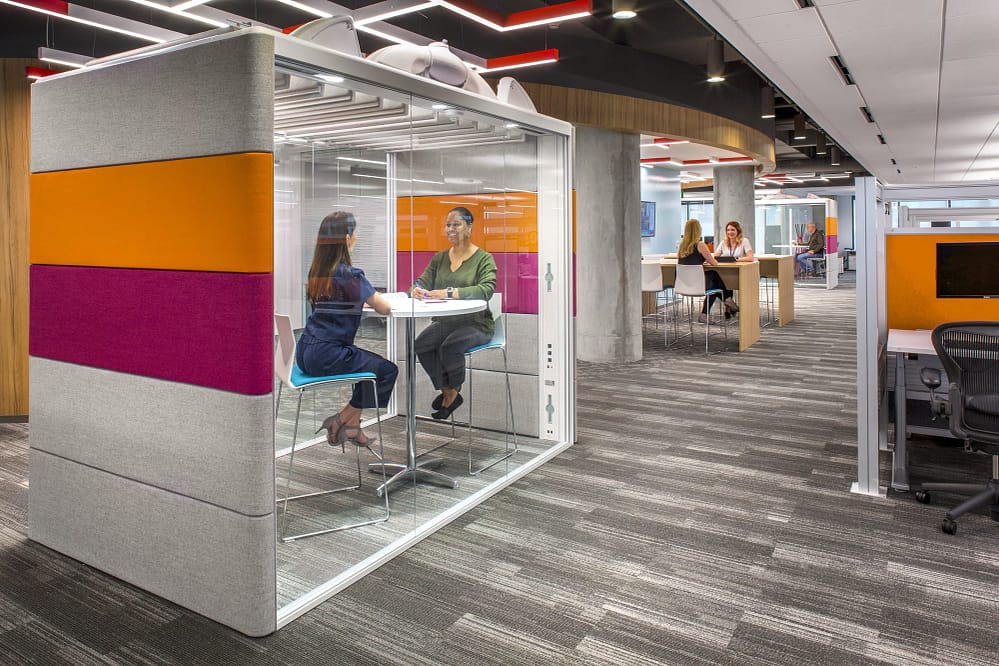 Those with ADHD can benefit from free address systems that support a choice of work environments and reflect their need for regular movement. Confidential Client, Alpharetta, GA. Photography © Thomas McConnell.

To help with remodelling or building new offices, Sean Gilroy, head of neurodiversity and cognitive design at the British Broadcasting Company (BBC), and his colleague Leena Haque have created an environment checklist to guide BBC estate teams that consider how spaces can help keep any and all staff happy and productive. The checklist takes into account visual design, the use of patterns, colours and their contrasts, as well as shiny surfaces and the way that light comes through windows and creates reflections. There are also audio considerations. Open-plan offices are cited as a poor environment for those with neurodivergent conditions because they can be distracting and overwhelming. Individual offices or quiet areas where people can work without disturbance are key. Gilroy notes that although many organizations have successfully handled the challenge of physical accessibility, attention to cognitive accessibility isn’t really well appreciated.

A resource produced by BBC CAPE (Creating a Positive Environment) for BBC Academy—the broadcaster’s internal training department—is a virtual-reality immersive video that provides a first-person perspective of a typical office experience for a person with neurodivergent traits. The video shows how hard it is for someone to concentrate when they are overwhelmed by sensory input. This type of tool is excellent for raising awareness and setting the stage for a truly inclusive work environment that prospers from the talent and skill of all staff while accommodating a range of personalities across a vast spectrum.

Complementing an open, inclusive culture based on understanding with an appropriate and sensitive work environment design that uses new tools and innovative planning will enable companies to benefit from the rich capabilities inherent in neurodiversity and build strong, diverse workplace communities.

Neurodiversity in an Inclusive Work Environment - via @IAarchitects

Workplace design thinking is evolving at the fastest pace in decades, and one word seems to be on everyone’s lips: hospitality. At the same time, a wholesale pivot to a pure hospitality design approach (an all-out sprint for the luxurious and engrossing aesthetic of the boutique hotel or hot new restaurant) is an overreaction. Admittedly, END_OF_DOCUMENT_TOKEN_TO_BE_REPLACED