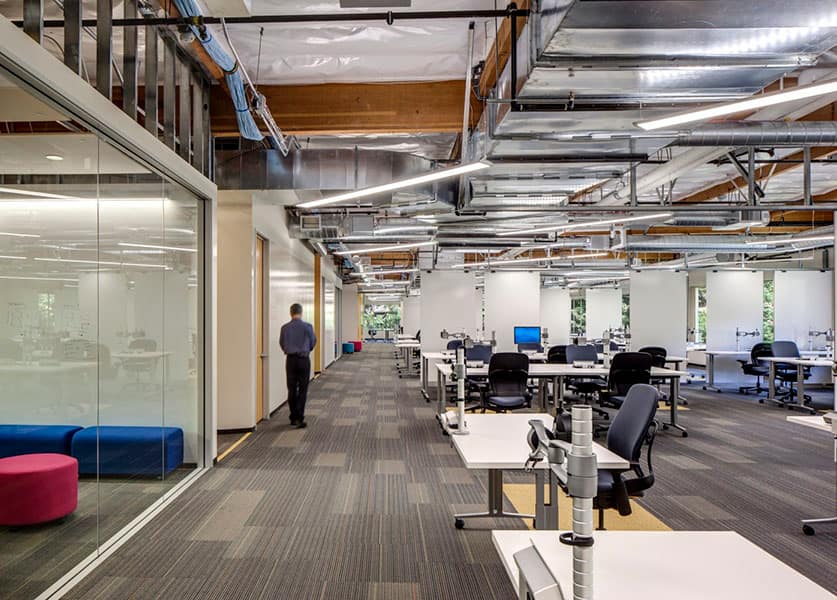 In the hills of Palo Alto, California, enterprise application software firm SAP renovated its Deer Creek campus, just over the hillside from the larger SAP campus. This renovation initiative explores a radically different approach to the ubiquitous term “collaboration.” Organized around a central courtyard, the three-building research and development site was designed to further the progressive and exploratory principles embodied in their Apphaus concept, which prioritizes user preferences, rapid process considerations, and space modularity.  The Apphaus beta sites in Europe were 30-person engineering facilities that explored these ideas and provided the foundation for the Deer Park design.

For 500 of SAP’s engineers in Northern California, the IA-designed work environment supports collaborative yet casual settings that are rapidly fluid: Furniture can be moved into new configurations within flexible, open architecture. A system of rolling whiteboards suspended from ceiling tracks provides separation of the “modules” for teams of about 10-12, and adjusts to larger or smaller teams. Light-weight desking can be rolled and reconfigured to align with the needs of the individual and the team. Power and data is accessed easily from a low-profile raised floor, so cords are minimal.  Engineers can redesign their work space as many times throughout the day as desired. Only conference rooms and core service areas are fixed.

In addition to hyper-collaborative and open work areas, huddle areas can be ”enclosed” with metal mesh curtains for a gesture of privacy. Conference and small meeting rooms are enclosed predominantly by glass, yet the metal studs of the walls are exposed at the top, allowing sound—and ideas—to pass between the room and the open area. The open ceiling and exposed HVAC system supports acoustics with a low level of ambient noise that helps to dampen conversations. SAP’s leadership was not interested in a quiet work environment—they found that the energy and conversations overhead from one group to the next were instrumental in propelling the work cycle. This was one of the key findings from the global Apphaus beta projects.

IA’s application of Apphaus principles was altered to what we coined “Scrumville.” The term scrum is derived from rugby terminology when a team comes together quickly to restart a play; in engineering it is a fast, problem-solving tête-à-tête. Our term combines scrum with Dr. Seuss’s Whoville, a fictional town with seemingly impossible aesthetics and where imagination reigns. In SAP’s application, the permutations of personalized environments expire only when end users have completed the task at hand. This concept has transformed all three buildings into basically a scrum environment, rather than using a specific scrum room.

By creating this loose and fluid environment, SAP fostered the idea of working anywhere as needed in an open environment that values transparency over confidentiality. A majority of the walls are writable, which reflects the company’s culture of “leave it up, it may inspire others.” All of the space is meant to support design thinking and push the boundaries of the engineering process.

Scrumville was largely defined by a rapid prototyping session with SAP leadership and end users. Rapid prototyping is a design thinking exercise that emphasizes the methodology of:

The emphasis of the process for strategists and designers is to engage with others to understand the “problem,” and then test ideas quickly to find the appropriate solution.

Workplace design thinking is evolving at the fastest pace in decades, and one word seems to be on everyone’s lips: hospitality. At the same time, a wholesale pivot to a pure hospitality design approach (an all-out sprint for the luxurious and engrossing aesthetic of the boutique hotel or hot new restaurant) is an overreaction. Admittedly, END_OF_DOCUMENT_TOKEN_TO_BE_REPLACED