Six Memorials You Should Know

Every year US roadways are pushed to their limits as Americans remember Memorial Day. While many will mark the occasion by going on vacation, or spending time with family at home, others will use the time to visit one of the thousands of memorials that help us to remember the sacrifices of those who have died for our country. With that in mind, we take this opportunity to recognize six lesser known memorials that may not get as many visitors as they deserve.

The Tripoli monument, if for no other reason, is notable for the number of “firsts” and “mosts” one uses when trying to describe it. Twenty years after the U.S. Constitution was ratified, the country’s first congressionally-approved monument was transported to Rhode Island by its most famous ship – the U.S.S. Constitution (Old Ironsides). Fittingly, the ship that carried the Carrara marble structure across the Atlantic was also pivotal in the conflict that the stone masterpiece was intended to memorialize – the First Barbary War.

Once assembled, it was then transported to DC where it would become the city’s first and only monument for the next 35 years. Eventually, it would be moved to Annapolis, where it remains. Comprised of a 30-foot-tall marble column adorned with a sculpted eagle, and surrounded by four marble figures, the recently restored (circa 2000)  monument is beautiful, and absolutely worth visiting. 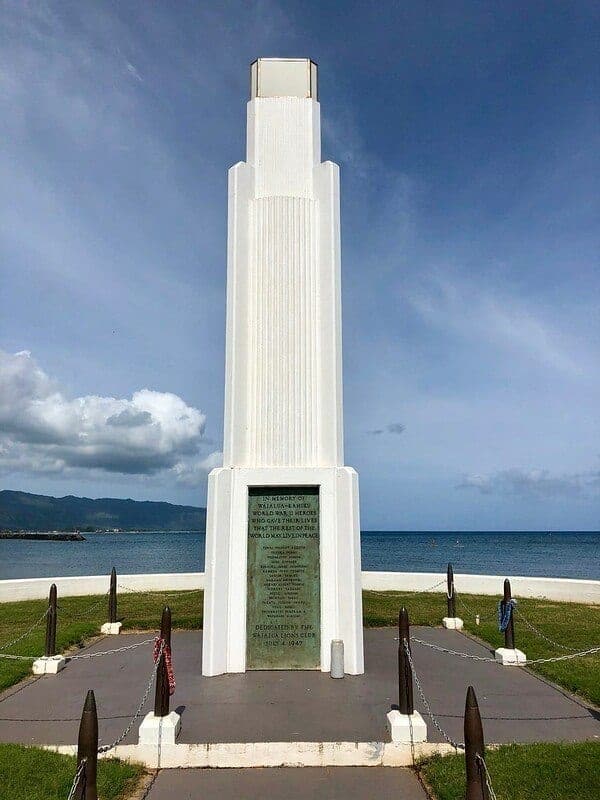 The Hale’iwa War Beach Park Memorial is not the largest, oldest, or most significant war memorial on American soil. Its design is not particularly significant, nor does it memorialize a comparatively large number of Americans. However, this oft-forgotten memorial to the residents of Waialae-Kahuku who sacrificed their lives for their country in World War II, the Korean War, and the Vietnam War may take the prize for most stunning backdrop. If you’re able to find a picture of the memorial without a “Sunset Suratt Surf School” truck parked next to it, you’ll see an impressive view of Waialua Bay, the Mokulēʻia and Kuaokala Forest Reserves, and the famous Banzai Pipeline. It’s a stunning tribute, and since it lacks a website, facebook page, formal conservation society or much mainland renown, it certainly deserves more notoriety.

While likely the most well-known of any of the aforementioned memorials, it's fair to say that, given its storied past, the celebrity of its designer, and its location in Brooklyn, it is certainly deserving of more notoriety. The Prison Ship Martyr’s Monument is dedicated to over 11,500 of America’s first Prisoners of War who died aboard one of sixteen British prison hulks that anchored off the U.S. coast during the American Revolution. Conditions were deplorable and treatment of American prisoners was extremely poor, so it may come as no surprise that by some estimates, mortality rates hovered between 60-70% for those onboard.

The remains of those who passed were found over the following 116 year in various areas surrounding Wallabout Bay. They were organized in a series of wooden boxes and barrels until a memorial was constructed. Unfortunately, the first attempt at this was waylaid by Tammany Hall corruption. The second attempt would quickly fall into disrepair, and it wasn’t until 1908 that the soldiers were interred at their current location in Fort Greene Park.

Subject to the ebb and flow of neglect and restoration, the 140 foot tall Doric column was once the world’s tallest and features a plaque commemorating the martyrs, as well as a crypt holding all of their remains.   At this writing, there are no formal Memorial Day events planned in Fort Greene Park. 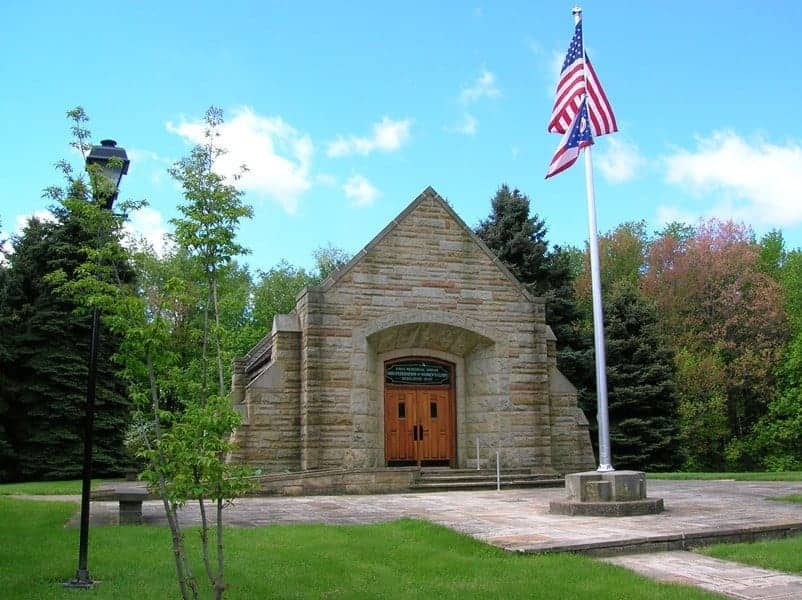 Tucked away in Ashland County, Ohio, about an hour’s drive from any metropolitan area is Mohican-Memorial State Forest. Over 4,500 acres, it is well-known for the quality its hiking, biking, and horseback riding trails, but less known as a shrine to Ohioans who fought and died for their country in American conflicts following WWII. The official Ohio Division of Forestry website states that, despite being a popular destination in the years following the Second World War, the “construction of Interstate 71 and the accelerated pace of modern life took a toll on the number of annual visitors.”

The shrine itself is beautiful – surrounded by Ohio woodlands and easily accessible via well-manicured footpaths that are incorporated into the forest’s trails. Inside the large stone structure are eight binders (known as the great books) that list the names of almost 20,000 Ohioans recognized for their service, and there are also a handful of other mementos to the fallen. Twice a year the facility is home to a formal event recognizing those individuals: one held by the American Gold Star Mothers on the last Sunday in September, and the other by the Veterans of Foreign Wars every Memorial Day. 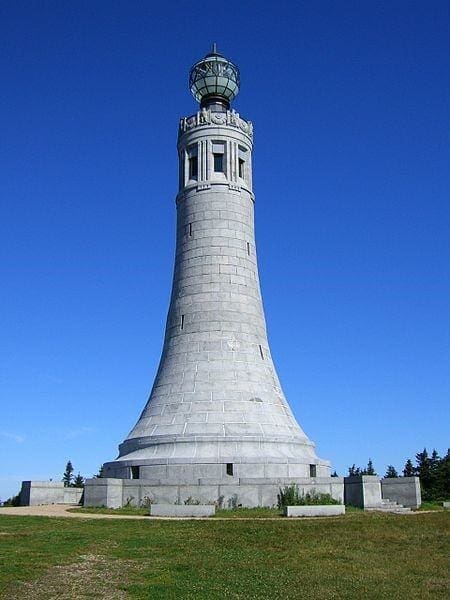 Named an official WWI monument in 2018, the 93-foot-tall lighthouse was erected in 1932. Despite its size and visibility (the light from this functioning lighthouse is visible from 70 miles away), the structure is hardly mentioned on the Mass.gov website.

Sitting atop the highest point (Mt. Greylock) above sea level in Massachusetts, the tower should qualify as the human-made structure at the highest elevation in the state. Done in the art deco style, the tower features a bronze eagle marking the site’s entrance, and a lit torch in bronze relief. The surrounding Mount Greylock State Reservation is open to visitors year-round.

The Spirit of Victory is but one of several memorials located in Hartford, Connecticut's Bushnell Park, and one of only a few dozen monuments in the country to the Spanish-American war. The benches and bronze that make up this memorial are less than imposing, despite its beautiful surroundings. But its lineage is notable. Sculptor Evelyn Beatrice Longman was the first female artist accepted into the National Academy of Design. When she created The Spirit of Victory in 1926, she was already well known for contributions such as:

The resulting bronze and Tennessee limestone exedra are lovely to behold, and while there are no special Memorial Day plans for the piece, historical tours of the park and its many statues, fountains, and other features are available from May-October.

Workplace design thinking is evolving at the fastest pace in decades, and one word seems to be on everyone’s lips: hospitality. At the same time, a wholesale pivot to a pure hospitality design approach (an all-out sprint for the luxurious and engrossing aesthetic of the boutique hotel or hot new restaurant) is an overreaction. Admittedly, END_OF_DOCUMENT_TOKEN_TO_BE_REPLACED

Six Memorials You Should Know (But Probably Don't) - via @IAarchitects