The After Five Lounge

The Bear and Rabbit 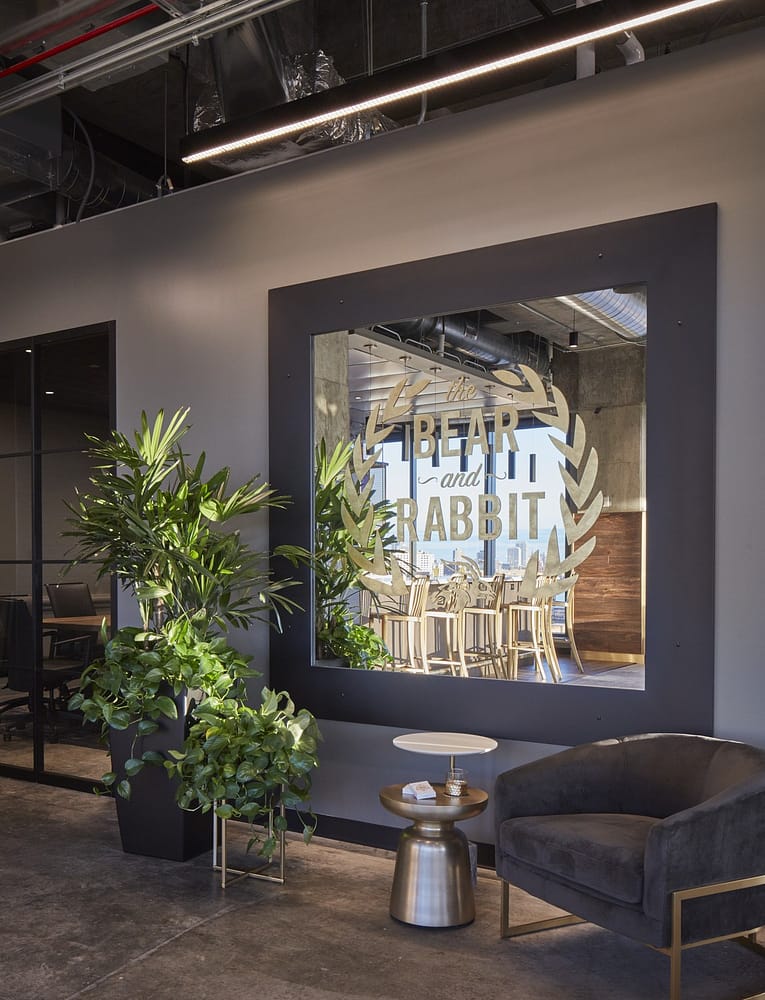 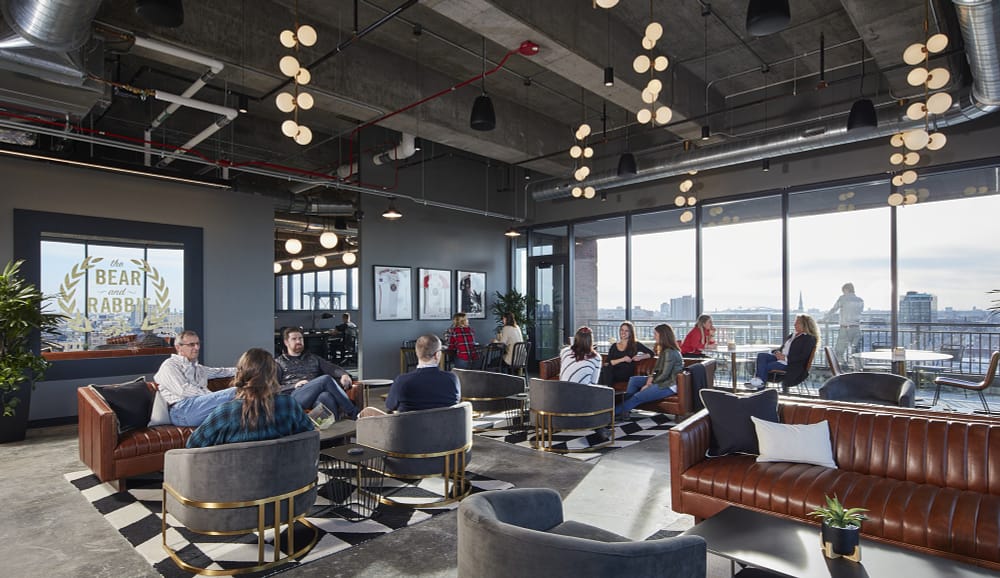 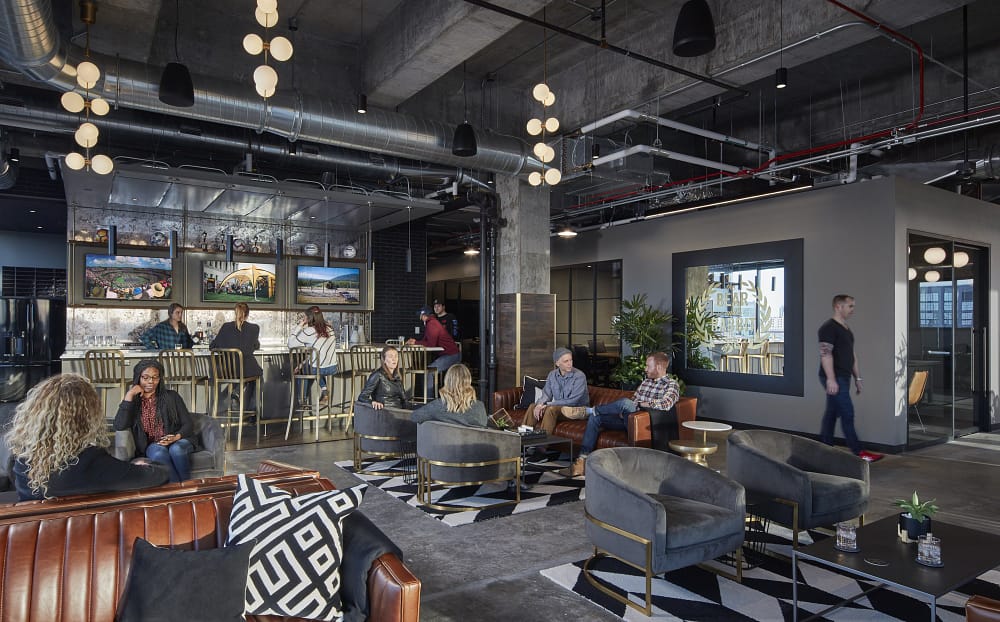 rEvolution, a sports marketing company based in Chicago, was inspired by their clients’ connection to hospitality, and knew that a casual space to eat and drink would be appreciated by employees and clients alike. One tour of their space and it becomes quite evident how the lounge, VIP areas, and a sports-inspired waiting area all come together to help them create a great client experience.

In many ways, the Japanese whiskey bar IA created for ASICS is comparable to Hibiki whiskey. Simple. Unassertive. Elegant.

When ASICS decided to move their Creation Studio from California to Boston, it was important for them to connect the new space to their Japanese roots. Undulating white louvers inspired by Zen gardens, an array of natural materials consistent with Japanese design trends and a Japanese whiskey bar were all a part of that effort. The space establishes an inspiring home for ASICS designers, a beautiful showroom for new products, a flexible work area, and a great location for happy hours, which probably explains why this workplace would was named CoreNet New England’s Best Small Workplace in 2018.

The moment you see the second-most iconic logo in Linux, your hard pressed not to think of all things film noir—private investigators, silhouetted figures, trench coats and speakeasies.

So, it wasn’t all that surprising when it was suggested that a speakeasy be incorporated into the space at Red Hat’s Boston office. Appearing at the back of the Red Hat Briefing Center (a customer experience designed to showcase Red Hat’s cutting edge technology), the Skybar is where clients have the opportunity to relax and reflect on the Briefing Center. Feeling as if it had always been there, the Skybar creates a memorable experience for clients that hearkens back to Boston’s past.

The first misconception you might have about the bar we created for Bacardi Limited in Miami was that it was created specifically for Bacardi Brand Rum. The second is that this space is just a bar.

Being the largest family-owned spirits company in the world, Bacardi couldn’t play favorites with their brands when it came time to design a space that functioned as an event venue, product showcase, client lounge, and employee amenity. They had to create a space that could also help them promote many of their other (delicious) offerings such as Grey Goose vodka, Patrón and Cazadores tequilas, Bombay Sapphire gin, Dewar’s scotch whiskey, and many others. This dual role might help explain the customizable lighting environment, open space, luxurious surfaces, glass partition, and of course, the extensive bar. At the end of the day this is one of the most luxurious cocktail lounges in the Bacardi portfolio, but is by no means the only one, as similar spaces come standard in every IA-designed workplace created for the global organization.

Perhaps the only unfortunate thing about the Boston Clubhouse is that you won’t actually get to spend much time there. Rather, the bar area is simply the first step in a fashion experience where bartenders are just as much a concierge as they are a slinger of drinks.

This IA-designed space in Boston houses a wide variety of business functions for the Trunk Club, a membership-based fashion service. While a significant amount of the square footage is reserved for office space, including many of the on-call and online services the organization offers, The Clubhouse is something different. A client-facing, in-person experience, Trunk Club members are greeted by the concierge/bartender and given a complimentary drink shortly before they meet their stylist, who then measures them for size (if necessary), and proceeds to advise them on all things style. While time spent at the bar is relatively minimal for a given client, think of it as the cherry on top of the sundae (or old fashioned) in the Trunk Club customer experience.

The LinkedIn speakeasy, unlike many of the other bars we’ve seen, isn’t made to appeal to just anyone. As a matter of fact, it’s rather hard to find.

If you’re looking for a way in, you’ll have to start in the Empire State Building, and make your way to an array of 133 rotary phones. After that, we’re afraid you’re on your own, as you need to know which specific phone unlatches the concealed door that grants access to the bar.

“The speakeasy is a space that becomes a shared connection for users at LinkedIn” says Lauren Helman Foley, Senior Designer at IA.

Not many bars can claim that their humble beginnings started with a thirst for…knowledge. But that’s exactly the case at the speakeasy nestled away on Rapid7’s seventh floor. Due to the open atrium that consumes four whole floors of the new Boston headquarters, it’s not exactly hard to find (the space is visible from two floors away, or one drone flight pattern away as the recent video illustrates), but that doesn’t mean it’s without it’s secrets. The many framed photographs and maps that serve as an homage to the city behind the bar actual help to hide a concealed barn door that opens to a fully-stocked bar (although we’re sure that the twin taps were a dead giveaway).

During happy hour the space is alive and thriving as Rapid7 hosts many events on site to celebrate employees. But during the day the space is a little more quiet, since it doubles as a casual meeting space and learning library that’s carefully curated by none other than Rapid7’s President and CEO Corey Thomas, who went into the project knowing that he wanted his team to have a space that celebrated learning and achievement.

Workplace design thinking is evolving at the fastest pace in decades, and one word seems to be on everyone’s lips: hospitality. At the same time, a wholesale pivot to a pure hospitality design approach (an all-out sprint for the luxurious and engrossing aesthetic of the boutique hotel or hot new restaurant) is an overreaction. Admittedly, END_OF_DOCUMENT_TOKEN_TO_BE_REPLACED