Scroll Down to Learn More

Big Fish is a casual gaming company who delights millions of people each and every day with popular mobile games like Gummy Drop!, Cooking Craze, Fairway Solitaire and Big Fish Casino. Founded in Seattle in 2002, the company historically renovated one of the area’s most iconic buildings to create a highly functional and expressive headquarters reflective of its Seattle roots. It brings together and complements the Big Fish staff, an incredibly creative, agile, and genuine group of professionally playful adults who know how to work hard and have fun.

Built in 1910, one of the last heavy-timber post-and-beam buildings on the Seattle waterfront, the Maritime Building initially warehoused goods headed to the Alaskan and Yukon territories, later accommodating as many as 58 tenants at the same time in dramatically different pursuits, including printers/publishers, machinery manufacturers, food-related firms, and professional services. Iconic firms like Western Union and John Deer Plows, along with an assortment of small businesses populated the premises throughout the years.

The location is in the heart of of Pioneer Square, the city's oldest neighborhood and epicenter of the historic Great Seattle Fire of 1889. 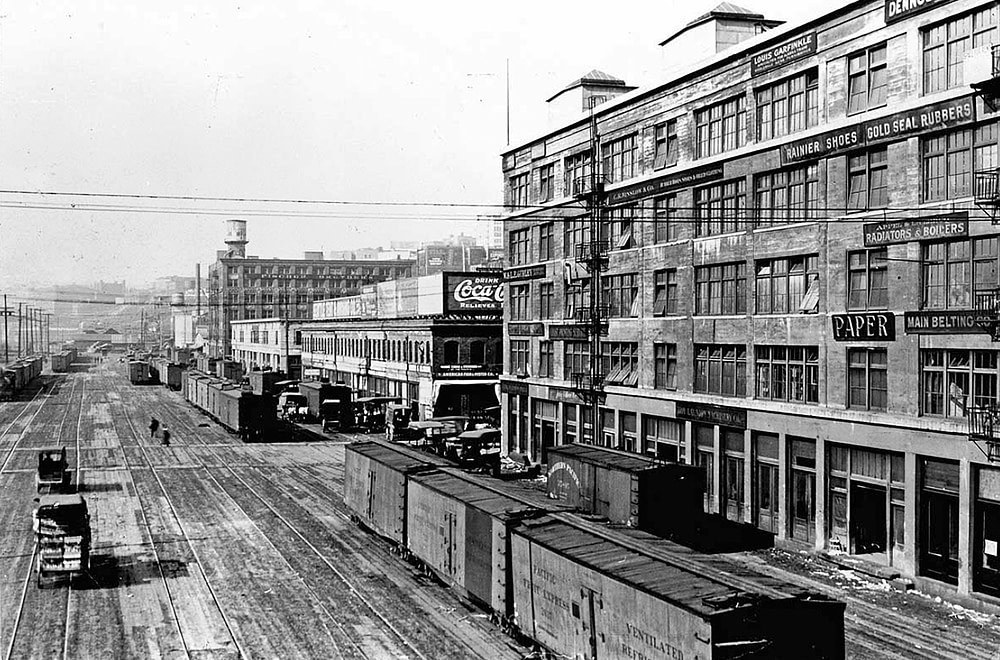 "We toured 13 buildings and finally got to the Maritime Building. We were standing there on the rooftop with the leadership of Big Fish—and the guys just stood there looking out at the water and it was like we knew this was their home."

Locating the new headquarters in the heart of the city was a priority for Big Fish. Many, if not most, of its team live near or in the city, love the amenities it offers, and want to be a part of its vibrant life and ongoing history.

Moving to the new location, with great transportation, in a historical area enjoying a revival and proximate to downtown and a variety of restaurants, clubs and Seattle venues, including CenturyLink Field, encourages participation and socializing. The warehouse area, soon to be ground zero for the waterfront revival, also positions Big Fish to play the city’s history forward and be a significant part of its future.

Accessible by foot or bike is Pike Place Market, opened in 1907 and one of the oldest continuously operated public farmers' markets in the United States. Just beyond that is Belltown, with its high-rise condos, indie boutiques, world-class art, and live-music nightclubs.

If you commute to Big Fish, it’s a breeze. The old ferry docks remain but Colman’s Dock, to the left of the Maritime Building, is a fully renovated transit hub. Along with the Pioneer Square Transit Tunnel and 90 major bus lines, commuting on public transportation is easy—a win for a sustainability-conscious Big Fish staff. If you drive, interstate highways 5 and 90 are nearby. Firmly in the Southwest corner of the city, the new headquarters is also moments away from the ferry terminal that takes commuters to and from the surrounding islands.

"At our old location, we had 42% of our people driving to our office. With the move down to Seattle, from day one, we were already at 27%. Now that we've been in the office for six weeks, it's already down to just above 20%. So we've cut in half the amount of people who are impacting the roadways in single-use or carpool cars."

A greater than usual variety of space types and surfaces are tailored specifically to game development and intense collaboration. Secluded focus rooms, stand-alone high-top tables positioned in hallways, and upholstered chairs with backs designed to be sat on are some of the options. With teams constantly working on multiple projects at the same time, a seamless and immediate flexibility is key for personal spaces as well as breakout spaces and conference rooms

Everyone has a spacious individual workspace to make their own. Fully sit/stand, programmable desks, as well as monitor arms, furniture, storage, and task seating can be moved around to suit the individual. Staff can customize their environment using self-produced content; graphics generated by highly competitive development teams have a place to be displayed.

A two-story interior feature stair, a digital “pixel” wall, a moss covered column as well as moss covered walls in collaboration and quite zones, and an oval fish tank that weighs 5500 lbs. are among design elements that speak to brand. Training rooms, a mother’s room, a museum focused on the building’s and Seattle’s history, a device test lab, and a Faraday Cage—an electronic isolation chamber that prevents electrical signals or waves from passing through the walls so that new games can be securely tested—are all part of the design.

The headquarters is positioned for wellness. Its proximity to water and stunning views of the bay, abundant natural light from floor-to-ceiling windows, warm reclaimed wood, live plants and moss, and outdoor deck, as well as the fish tank are powerful biophilic elements, soon to be extended with the addition of a park and bike and walking trails, part of the Waterfront Seattle project.

"…this living wall that is actually a living wall, the art on the walls, and everything here is just like you're walking through and it feels and sort of lives and breathes Big Fish as well as Seattle. So it's a really nice space and I'm glad it's here. "

The variety of sensory elements inherent in the new design provide delight and interest at every turn. From verdant moss to warm woods, cool metals and concrete, lush colors, upholstery, and fabrics, along with the ever changing moods of Puget Sound, a plethora of impressions—tactile, visual, and auditory—are a daily given and pleasure.

The IA team leveraged the historic character of the building at every opportunity, exposing the heavy timber columns and concrete walls where possible, incorporating original sliding metal doors as pivoting screens, and repurposing much of the original wood as flooring, fixtures, artwork, and furniture. The rich heritage of the building was juxtaposed with a modern renovation.

The entire top floor is focused on building culture, brand, and community. Arcade games offer decompression and opportunity for comradery. A gym provides cardio and weight training, as well as spinning and yoga classes. Overlooking Puget Sound, a spacious comfortably furnished outdoor deck, with a grill and a fire pit, is ideal for internal and industry-focused events or as a place to hang out with colleagues.

“We have a very energetic, compassionate culture here, and this space really contributes to that with all the common areas and the ability for people to get together, both during work as they eat their lunch in a beautiful place like our rooftop deck as well as after work getting together and playing board games. We've seen a lot of that happen in this space because it is such a beautiful space that people want to hang out and be here. It's also cut down on a lot of people's commuting time so that's more time to hang out and to play.”

From the start, the goal was to merge the building’s inherent character with the Big Fish culture and mission—historic meets futuristic. Imagine a space ship inside a wooden crate. Given the site’s history and staff’s appreciation for all things sci-fi and their high-tech prowess, the working moniker "the Landship" was a natural.

Built on tidelands and fill, with a high water table, the building’s superstructure was initially supported by driven wood piles with concrete caps. Not surprisingly, the original basement is today under several feet of water.

“When we found this place, it really was able to drive home the point that we were a Seattle-based company, and what we bring to our games is a direct representation of what we do here in this area. And also, the environment is as inspiring as the Pacific Northwest and Seattle. We were able to  build upon the desires of the leadership team and our employee base to really deliver a space that everyone is proud to be in, proud to work in, is a unique space, and is individualized. The amount of energy put into [the creation of the new headquarters] is minute compared to the amount of energy that we're now seeing coming out of the space. It's phenomenal.”