Vampire Voltage in the Office

As organizations begin to focus on environmental stewardship and consider the energy consumption of their workspaces, two possibilities emerge: develop their own sources of sustainable energy or optimize current energy use. While both of these approaches come with advantages, the former is not always an option (consider tenant spaces, for example). Undoubtedly, those choosing the latter path realize that many of their existing systems and appliances are drawing electricity throughout the day when they are not being used, which is the basis of phantom load (also called vampire voltage or standby mode).

At its essence, vampire voltage occurs when items are turned off (more accurately, are in standby mode) and sometimes, unbeknown to the user, are still consuming electric power. These are most often devices that utilize a remote control, have a digital clock, or are designed to have a quick start function that allows them to be operated more swiftly than if they were powered off completely. In the workplace this can take many forms ranging wildly in scale from unused phone chargers to commercial HVAC systems. Keeping this in mind, facilities managers and sustainability initiative stakeholders generally have two questions:

The emergence of hybrid work and hoteling only makes the need greater for organizations to look at their energy use, as more devices are left plugged in without actually being used. Architects, designers, strategists, and potential consultants must work with user teams to explain the importance of vampire voltage, monitor it, and implement potential solutions.

What is the impact of phantom load?

The impact of phantom load in residential spaces has garnered significant attention over the past decade and caused millions of homeowners to turn to smart strips and comparable devices to realize marginal energy savings. One Natural Resources Defense Council estimate found that 23% of energy use in sampled homes could be attributed to phantom load. Similarly, the Department of Energy estimated that vampire loads were responsible for 5-10% of U.S. residential energy consumption. There has been significant progress in combatting residential vampire voltage over the past 20 years as large appliances have become more energy efficient, but in spite of this the widespread use of other technologies (e.g., mobile devices) has likely counteracted many of these gains.

The impact of vampire voltage on commercial space energy use, however, is more difficult to calculate. In any building it is considered a subcategory of total plug load (meaning anything that is plugged or hard-wired into the electrical system that is not a part of a building’s HVAC, water heating, etc.).  According to the National Renewable Energy Laboratory (NREL), plug loads may account for as much as ”30% of whole-building energy use.” In low-energy office buildings this rate can increase to 55% of total energy use.

Largely by studying energy consumption in offices during off-work hours vs. non-work days, multiple studies have confirmed that vampire voltage makes up a significant portion of total plug load. For example, a study from the University of California at Berkeley found that during non-work hours, workstations saw a 10% increase in power consumption Monday through Friday compared to non-work days. This use (attributed to charging laptops during the study) doesn’t include the vampire voltage seen at workstations during work hours (i.e., phone chargers, speakers) or account for major contributors to energy waste outside of workstations such as lighting, kitchen appliances, elevators, and other uses, yet shows a noteworthy loss of efficiency. A more dated study (1999) estimated that standby power consumption (another term for vampire voltage) accounted for 36% of total energy consumption at night and during weekends. 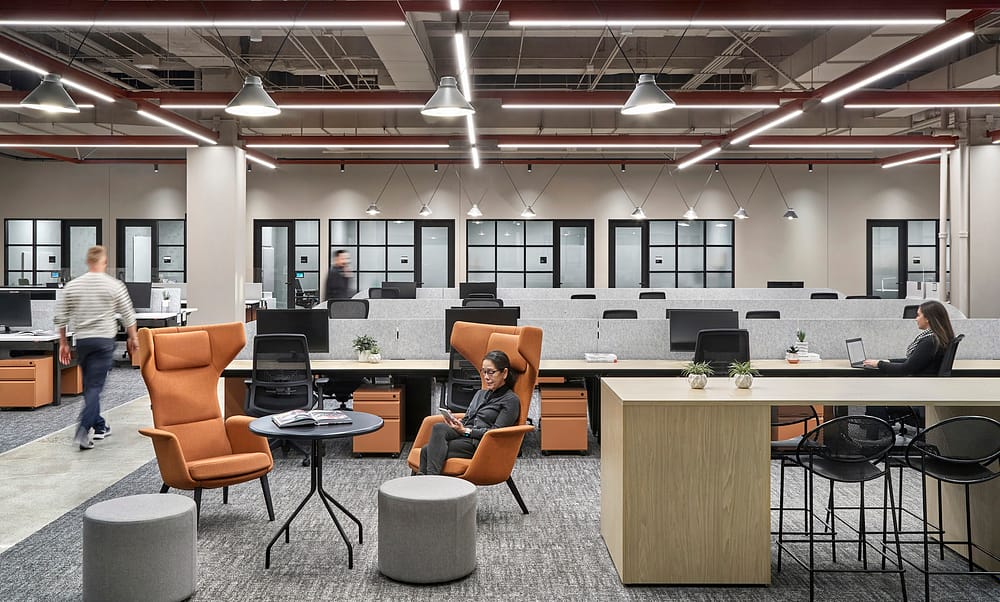 Individual workstations consume the most power-per-person energy of any location in the office. Home Chef, Chicago.

What can be done?

Building codes and modern certifications such as LEED, Living Building Challenge, Zero Energy Certification, and Core Green Building Certification by ILFI (International Living Future Institute) are doing much to reduce vampire voltage from major building systems, appliances, and lighting. That said, studies conducted by the GSA found that implementing additional controls (scheduled timers or occupancy-based controls) made a substantial impact on total plug load, including an energy savings of 46% for kitchen equipment, 21% for laptops, and 35% for printers.

Working with a design team and associated consultants, facilities managers can begin by setting up systems to monitor vampire voltage and then implement systems in the built environment to use timer and occupancy-based controls.

Selecting the Right Appliances and Lighting

Most Energy Star appliances include low standby mode energy usage, as well as labels indicating expected power costs. Similarly, many lighting manufacturers offer solutions that can significantly reduce energy waste. Neither of these solutions erase the impact of phantom load but can certainly have a positive impact when other solutions are not viable.

While building codes have been evolving to combat phantom load more effectively, the pursuit of certifications such as LEED can offer significant results. Companies that pursue certification will be guided towards programs that help minimize vampire voltage costs.

Recent studies show that encouraging users to reduce their energy use can have a measurable impact, and gamification programs show some promise. Regular communication and educational opportunities can help to involve users in energy-saving programs that reduce plug load.

Workstations consume the most power per person of any space in the office. Having IT teams create standards for device standby mode on laptops, desktop PCs, monitors, modems, and more can curb the impact of some of phantom load’s biggest offenders. In addition, the strategienorc use of smart strips and use of Energy Star certified equipment can go a long way to reducing vampire voltage.

Reducing energy use both during and outside of occupancy hours for a commercial space can undoubtedly lead to a healthier planet and energy cost savings, but there are additional savings to be found beyond that. The NREL suggested that modifying standby settings on printers, copiers, desktop computers, monitors, etc., would significantly lower repair costs (and presumedly replacement costs). The benefits of minimizing vampire voltage are enormous, and fortunately facilities managers working with a team of experts can develop a game plan to monitor and address this problem that is costing Americans at least $19 billion every year.