IA’s office in the City on a Hill donates 1,600 cans of food to the Merrimack Valley Food Bank. 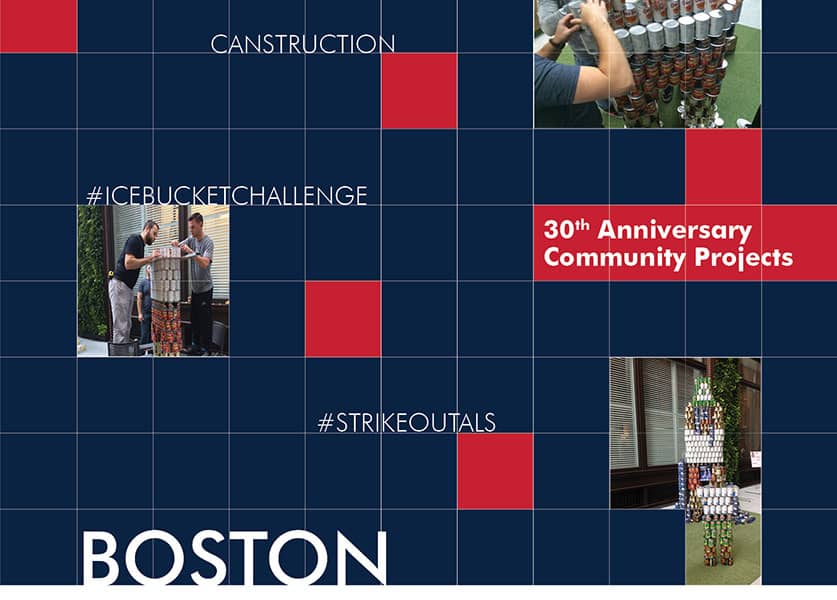 The Boston Chapter of the Society for Design Administration and the Boston Canstruction Committee hosted the city’s 19th annual Canstruction 2014 design/build competition at the Boston Society of Architects Space in the Atlantic Wharf Building. Twelve local firms, including IA Interior Architects, drafted designs centered around a common theme—this year was pop culture—that were realized with canned goods. After building, competition judging, and a period of display, all cans are donated to the Merrimack Valley Food Bank, located just outside the city in Lowell, Massachusetts.

“Our team brainstormed ideas from the Simpson’s to the Reddit logo,” says Marc Steinhagen, a job captain in IA’s Boston office who led the effort. The team agreed upon a recreation of the ALS Ice Bucket Challenge, and spent time at the local grocers buying cans of food to determine the best sizes and colors before importing the design into Revit. “There was some trial and error for what we could use, how many levels, and which sizes would line up, all while taking the nutritional value of our cans into account,” he says. 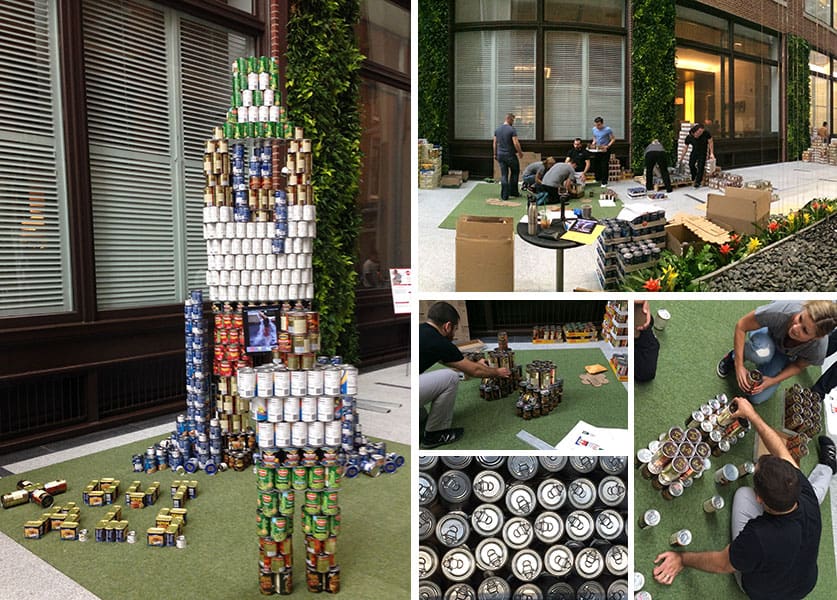 The matter of balance and stability was addressed by WB Engineers and J. Calnan & Associates, which partnered with IA on the design. “It was a fully collaborative team,” says Samantha Weinstein, an IA designer in Boston. “We were all able to apply our own specialized skills with this structure in a different way, which was a seamless collaboration given our joint project experience.”

Approximately 1,600 cans were used to build three related structures: An Ice Bucket Challenge nominee was rendered in cans of tomatoes, baked beans, and condensed milk. An observer made from sweet peas, green beans, chili, and organic soups records the ice water dump with an iPad.  Finally, Spam and milk cans spell out the hashtagged message that dominated social media streams this summer: X out A.L.S.

“We all have busy schedules outside of the office, but this brought us together on a new level by working with our peers and supporting a great cause by donating to the Merrimack Valley Food Bank,” says Katelyn Cantelli, designer, IA Interior Architects. “I think this has started a new tradition for the Boston office: We not only celebrated our past and current culture, but are looking forward to the next 30 years and taking part in Canstruction over the years to come.”