Theatrical Lighting in the Workplace 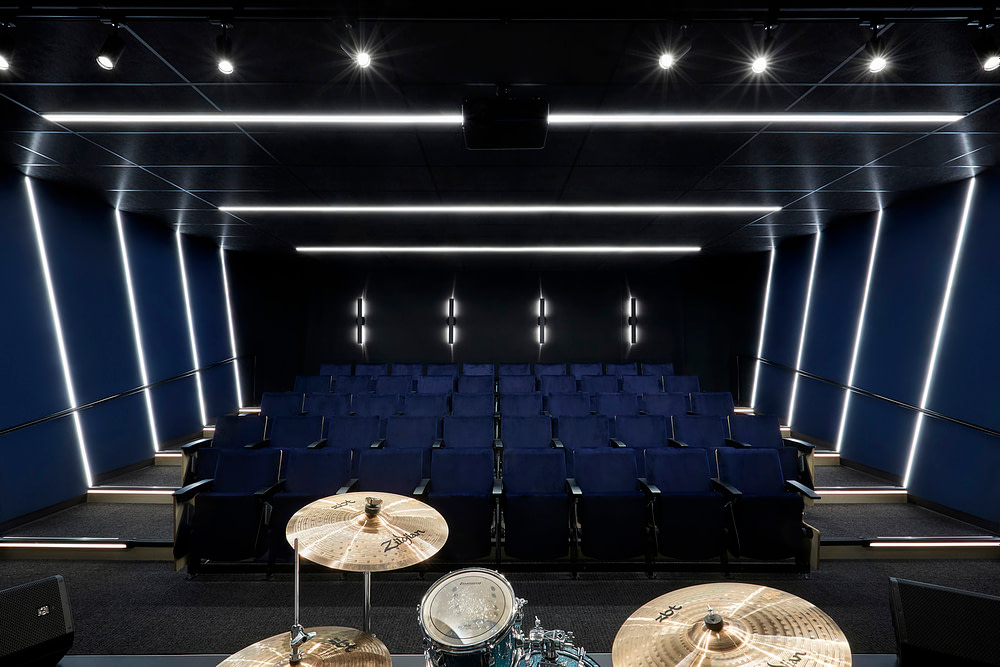 Today, an expertise in theatrical lighting design transcends the theater and lends itself to a variety of schemes that can enhance the work environment from open concept designs to phone rooms to wayfinding and more, as well as improve the user experience on multiple video platforms.

With the increased reliance on video platforms for meetings, webinars, and online events, the effect of lighting on the quality of interaction and communication between video participants is particularly important, especially when striving for a parity of experience between workplace and remote users. To be seen, ideally everyone should be well lit; anything less is a distraction. To enhance the video experience, some businesses have taken a cue from theatrical lighting, integrating aspects of that technology and its effectiveness into the work environment in a variety of ways. Others have adopted full-on theatrical lighting for broadcast purposes and especially all-hands meetings with a global workforce. What are the possibilities and how do they work? Why are they necessary?

Architectural lighting—typically heavy on downlighting—is intended primarily to simply illuminate an area. Open office lighting, for instance, accommodates the task of working in an open space and is not always geared to photography or videography.

Theatrical lighting, if done correctly, allows participants to be seen/filmed in optimum light; that is the intention behind it. Because it requires specialized expertise, costly equipment, and extensive studies for adaptation to a given environment, theatrical lighting is somewhat of a rarity in the workplace. But with more and more happening on camera at work, it is sliding into the office as an imperative through the creative use of ready-made products and bespoke lighting schemes that create adapted solutions.

What then is basic to theatrical lighting? A three-point lighting system is the classic, traditional method for illuminating a subject on camera or on stage. You may be  familiar with it—key light and fill with back lighting—the standard used in visual media, including theater, video, film, still photography, computer-generated imagery, and 3D computer graphics. 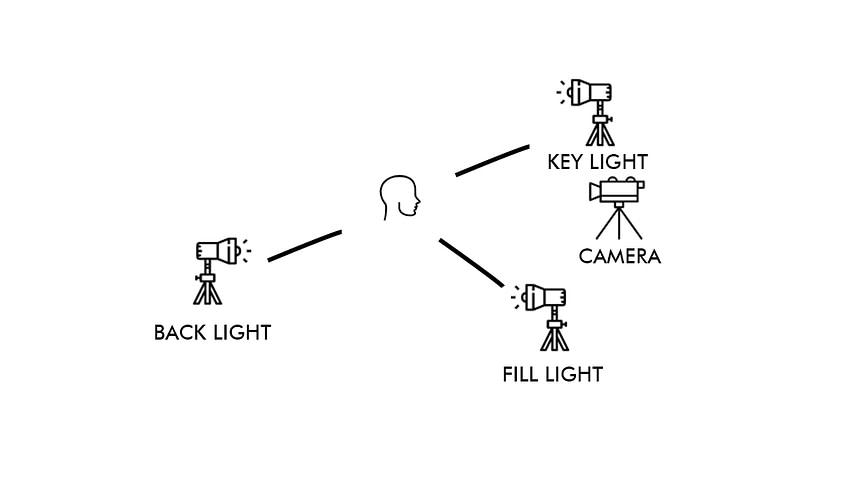 The key light is the main light that illuminates the subject; the fill light, softer and less bright, is directed toward the subject from one side at an angle relative to the key light. This helps accent the subject’s features—everyone wants that chiseled jawline—along with the required highlighted background. The back light, although essential, must be carefully tuned. If it is brighter than the subject or is the darkest thing in the room you may have a problem. Three-point lighting creates visual contrast, accents natural features, lifts shadows, and softens light, giving depth and form to the subject so it can be seen. Used in a defined space, this is an approach that works well.

What space types in an office environment will benefit most by borrowing some aspect of this lighting scheme? Conference and meeting rooms regularly used for video meetings and phone rooms are ideal candidates. When appropriately outfitted, for instance, a team room frequently used for filming or video conferencing is video-ready on demand.

The phone room, almost mandatory in today’s workplace environment, is another space that will benefit from an adaptation of the key light approach. Yet, despite their attractive design, most phone rooms use a downlight. In 1989, when you hopped on a phone call, that worked well. But today that doesn’t work for a video caller with laptop in hand. The light source in a phone room should be directly in front of the user or slightly to both sides. It will also illuminate vertical surfaces and can easily be controlled with a dimmer nob. If you don’t want to touch anything, there are sensors that respond to the proximity of a hand. Move your hand towards the sensor and the booth becomes darker; reverse that motion and it becomes lighter. Prefabricated phone rooms offer these options. Designers need to collaborate with phone room manufacturers and adapt their technologies to architecturally build out the rooms in the workplace, which will ultimately be more cost effective.

Since video conferencing and zoom-type calls can happen anywhere in the workspace, what can be done to improve the overall performance of lighting in an open space? The installation of a stretch-fabric ceiling like those used on film sets and in automotive showrooms is another technique borrowed from theatrical lighting that can benefit a workplace. A stretch-fabric ceiling creates a giant softbox, which diffuses light by transmitting it through the fabric. Because the light is not directional—just a blanket of soft light that treats all skin tones evenly and reduces harsh shadows—almost everyone will look good. We drew on this scheme when designing a conference center as a luxury, half-floor tenant amenity suite for the John Buck Company, in Chicago, and incorporated a stretch-fabric LED-backlite skylight in the ceiling to enhance the space and heighten the atmosphere.

Can you get the same effect with an architectural feature? In a defined space, the effect can be achieved through indirect lighting. A confidential client recently requested that approach for all their video conference rooms, and it worked well, although the user experience in the conference rooms was a bit unusual and counterintuitive. Since no light is emitted from the bottom of the fixtures, the light seems to be going in the wrong direction. But the scheme facilitated exactly what the rooms were intended for—video conferencing. The objective was to look good on camera, even if the ambience was not the norm.

From the perspective of intention, the work environment can benefit through the application of theatrical lighting principles to shape the workplace experience. Reception as well as wayfinding (e.g., directional lights at or embedded in the floor or ceiling for intuitive navigation) are two aspects of the workplace that will particularly benefit from theatrical or creative lighting, in addition to special effects intended to encourage user engagement.

But what about full theatrical lighting in the workplace? A good example is the multifunctional Manifesto Theater that IA designed at Yext headquarters in New York. Broadcast-ready with integrated state-of-the-art audio-visual and a 30-foot LED screen, the theater’s sophisticated lighting scheme easily adapts to the company’s weekly CEO-led all-hands team meetings broadcast to a global staff, as well as to events ranging from TED talks to guest speakers to full-blown theatrical events.

Generally, what is required? The bigger question is why do you need it? It can be expensive, specific, and customized for each unique venue.  But if the theatrical lighting truly aligns with an organization's goals it is well worth the effort. When a client shows an interest in full theatrical lighting, we first make them aware of the requirement for an additional consultant, a systems integrator.

In general, it is understood that red, green, and blue make up the visible light spectrum, and from those colors theatrical lighting designers create additional colors. For the Yext theater we created color palettes using an array of nine different colors and six different variants of white light that automatically adjust to illuminate the subject and are specifically intended to flatter any skin color and tone. The system will select the right combination of colors to best fill out the visible spectrum.

Creating those combinations is where the lighting designer’s expertise comes into play. For example, adding too much red to the spectrum will make someone with light skin look flushed; add too much green and darker skin will look sickly. You have to fine tune the lighting options and understand the science of metamerism—how the color of an illuminated subject will change depending on the location of the viewer and the color, and how the light hits the subject. This is the science behind the varying appearance of the same color when viewed in different types of light—natural, fluorescent, or halogen.

Theatrical lighting uses a control system that often exceeds the knowledge of most electrical engineers and requires the additional consultant—the systems integrator whose expertise streamlines the lighting for client use. It is the integrator’s role to take the complex nature of theatrical lighting and tie it all together with a simplified, elegant user control. The user just taps a button or two and everything is optimally set in motion. You don’t need to know in advance who will be on stage. The system integrator will have created easy-to-use controls that automatically adjust intuitively.

Getting it right is a challenge, but we’ve come a long way since 1939 when The Wizard of OZ was the first major film captured in technicolor. At that time filming in technicolor required so much light to ensure the visibility of everyone on screen that the temperature on the set for most scenes was over 100 degrees Fahrenheit. Dorothy’s famous ruby-red shoes—originally silver in the L. Frank Baum novel—were intended to wow audiences with the new technology. Today lighting it is still challenging but we have computers to complement our expertise, and although it can be relatively warm on a stage or set, cooler options are increasingly being introduced.

Of course, there is theatrical lighting for true theaters like the amphitheater we recently designed for Cathedral City in California’s Coachella Valley, home of the famous Coachella Valley Music and Art Festival. Over the amphitheater stage a suspended grid of theatrical lighting, in addition to a less intricate lighting system for non-theatrical events, offers multiple levels of illumination and ease of use for international, regional, and local entertainers as well as the community. The theater shell, with creased origami-style roof and raked wall, 35 feet at the apex and leaning into the city, only adds to the dramatic effect.

Whether you are hosting a webinar, broadcasting, placing a video call/conference, filming, presenting in-person to an audience, or following the yellow brick road, the appropriate application of theatrical lighting can significantly contribute to ensure the best experience for all.